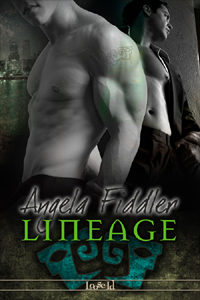 I downloaded Lineage, by Angela Fiddler (aka Barbara Geiger) from Amazon. It was, and still is, free.

Description from Goodreads:
Love didn’t just kick you when it were down; it staked you out and turned you into a vampire. Not that Vision was bitter. His ex-lover taught him nothing lasts forever, while his ex-master taught him to submit and the fine art of not resisting silk restraints. In exchange, Vision let both of them keep their heads. He considered it a fair trade-off.

Now Vision is a master, but still finds himself wanting to be on his knees.

Enter Hanz. He’s just a driver, but he knows what Vision wants and how to make it sting the way Vision likes most.

Vision won’t be fooled again. Sure, Hanz is sweet. The respect feels genuine, and, what’s worse, he honestly seems to love Vision. Older, wiser masters counsel Vision against Hanz. And, of course, they’re right. Hanz does have something to hide.And, as if on cue, along comes Vision’s ex-lover, the cause of and solution to being kicked, staked, and vamped. Vision is caught again, and this time not with ropes and silk. Now if he can only keep his neck and his heart intact…

Review:
Did I read a different book than everyone else? Because this has pretty good reviews, but I thought it was a bloomin’ hot mess! Half of it is in flashbacks, which honestly is better written than the scenes in the present, but better isn’t good. There is no interaction between Vision and Hanz before a single aborted sex scene and them deciding they were in love forever. None you guys! There was far too much sex. It cluttered up the already choppy narrative, but more than that it was utterly random. Like people standing in a hallway and one suddenly dropping to his knees to blow the other. What? Why?

The book is labeled #1, but there is obviously history somewhere and I REALLY felt the lack of it. The world isn’t explained. Vampires tapping ley lines, cool, but why? How? Is that what makes you a Master? Why don’t male and female vampires interact? Are they all gay? Why did Bethany need Hanz’s sister’s blood to turn him? What is a talent and how do you get one? No idea.

There are plot holes. Vampires need to be released from their previous masters, but Vision was never released from his. So, how’s that work? Plot points aren’t explained. Vision is the only master with two territories. I know where one came from. Where did he get the second? No idea. Vision is supposed to have betrayed all his masters. How? No idea.

Then, the whole thing ended by introducing a new character and a cliffhanger. Really? Yeah, I wasn’t happy with this one.