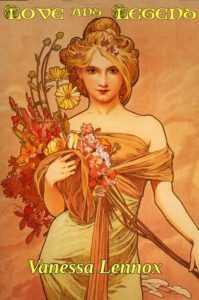 I picked up a copy of Vaessa Lennox‘s Love and Legend when it was free on Amazon.

Description from Goodreads:
Jules Flannery makes everyone feel better. It’s a gift. But this particular gift just may get her killed.

The day of the funeral, Jules is assaulted and loses Uncle Charles’ urn to the thief. Her Uncle’s odd last request offers Jules an unexpected new beginning. Jules, a sweet but accident-prone art teacher, and Bingham, a terse and potentially dangerous Navy SEAL, must unravel, and ultimately fulfill, their part in an ancient prophecy. Villains are out to orchestrate their own nefarious interpretation. The two lovers face Gallic and English thugs, coax a troubled boy out of his gloom, and discover that they have a strange and powerful connection. Their mission: find an Arthurian artifact kings have coveted for 1500 years. The trick is to not get killed in the process.

Review:
Sigh. This was not a winner for me. It started off well….Or rather, the writing started out really staccato and stiff, but got better (except for the persistent over-use of names in dialogue)…But the plot started out well and quickly got worse. The action, by which I kind of mean the plot, doesn’t really start until about 80% into the book. Everything up to that point is two people flirting badly and Jules being overly perky and too mommsy, cute and perfect. Then, once the h/H get together, it’s just an endless barrage of “I love yous,” “you’re perfects” and sex/kissing. Which might be ok if this was erotica. But all the sex is fade to black, so its just sexual inferences on repeat. God, I got so tired of it. Though I did have to appreciate that Jules was comfortable with her own sexuality and there was no angst or shame about her pursuing sex and the author didn’t make her a virgin. That’s refreshing.

Then, in the last 20 or so percent of the book, when the action picks up everything is solved in a matter of paragraphs. Each challenge barely has time to develop before it’s overcome, so there is no tension in it. Even the big, final climax happens off page!

There are a number of plot holes, most of them coming down to solving problems too easily. Example, a man who doesn’t technically have custody of his nephew arranges his wife-to-be to adopt the nephew from the state in less than a day, somehow without the state representative knowing. Or how about just how he has the nephew in the first place? As a 10 year veteran of children’s services, let me tell you, if you snatch a child from a foster parent the police are coming for you IMMEDIATELY. They are putting you in jail. They aren’t sending snooty employees out to check on you and the child. And they aren’t allowing you to arrange his adoption by someone else. They SURE aren’t letting you do that without background and household checks, interviews, a waiting period and extensive paperwork that has to go through a dozen people, all of whom let it sit on their desk for weeks before sending it on. This is just one example, but the book frequently glazes over things that should take time and effort as if it doesn’t

And can I just address the ‘everyone wants to impregnate Jules’ aspect of this book? Why does every man want her so badly? We’re told they do and we’re certainly shown it. (It’s just one more aspect of her too perfect to be believed persona.) But why? It’s not really explained or shown as pertinent to the events of the plot. And why does her whole purpose in that plot need to be about being desired by men and bearing a child? WHY? And that’s before I get to why does Bingham know more about her and her body and abilities than she does? Why does she need a man to explain it to her? That drives me crazy in a female character! He can understand her body but she can’t? Do better authors. Women aren’t that stupid and men aren’t that all-knowing.

This is one of those books I keep trying to come up for a concise name for. We all know a Mary Sue character when we see one (and Jules is definitely one). We all recognize a Marty Stu (Bingham is pretty close). But what is it called when the whole book has an innocent, too perfect to be tolerated feel to it? It’s so stagnatingly sweet it makes your teeth hurt. People hug and kiss each other constantly and compliment each other so often it’s distracting. What do you call that? Whatever it is, this book is it. And I’ve not found a single such book I truly enjoy because it always strikes me as amateurish.

Outside the names in dialogue, the writings not too bad, some of it’s genuinely funny (though some of the attempts at humor miss the mark) and I love that cover. But I’m afraid I can’t overlook all the aspects of the book that grated on me.