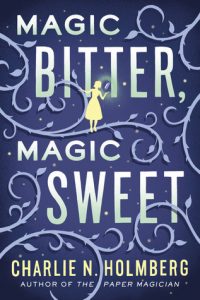 I’m on vacation this week, so posts will likely be few and far between. But I did read a book and a half on the drive from home to here and I happen to have internet access at the moment, so, I’m taking advantage of it with a quick post or two. Starting with Charlie N. Holmberg‘s Magic Bitter, Magic Sweet

Description from Goodreads:
Maire is a baker with an extraordinary gift: she can infuse her treats with emotions and abilities, which are then passed on to those who eat them. She doesn’t know why she can do this and remembers nothing of who she is or where she came from.

When marauders raid her town, Maire is captured and sold to the eccentric Allemas, who enslaves her and demands that she produce sinister confections, including a witch’s gingerbread cottage, a living cookie boy, and size-altering cakes.

During her captivity, Maire is visited by Fyel, a ghostly being who is reluctant to reveal his connection to her. The more often they meet, the more her memories return, and she begins to piece together who and what she really is—as well as past mistakes that yield cosmic consequences.

Review:
This is one of those books that is difficult for me to review because I disliked it for a lot of the time, but the end brought it all together and I finished happy. The simple fact of the matter is that at least half of this book is just the main character, Maire, being enslaved and abused. (Though it’s inferred to have happened to other captives, rape isn’t one of the abuses Maire suffers, but she is severely physically abused, as well as starved.) And while hints are dripped in here and there, it takes a long time for further plot to appear (so long I wondered that there could be one, as there didn’t seem time left to develop one). Luckily, there is one. It just loops back a bit. It’s a bit hadn’t-wavey on mechanics, but thought-provoking. Plus, though I wouldn’t call this a romance novel, there is a wonderful example of a strong relationship. All in all, it passed the time of a tedious car trip quite effectively and I’m glad to have read it.