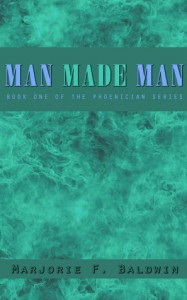 Author, Marjorie F. Baldwin sent me an ARC of book two of her Phoenician Series, Man Made Man. You can find my review of book one, Conditioned Response here.

Description from Goodreads:
Proctors don’t think–or they shouldn’t. A Proctor is supposed to follow orders but a Proctor named Raif can’t STOP thinking. He’s different and he knows it. He was MADE differently. Who made him and why? And what was he designed to BE anyway? With thoughts and memories that can’t be his own and donors from over a dozen genetic lines, all Raif knows for certain is that he was never designed to be a Proctor.

When Raif tries to find out the truth about his origins, he makes an even more horrifying discovery: his genetic design doesn’t exist. There’s no record of him in the Breeding Selections. The Archival records supposedly contain every human ever designed but he’s not listed. Was he supposed to be MADE or was his design some kind of experimental theory never meant to leave a laboratory dish? Was he given life by accident or was he made for some specific reason?

In MAN MADE MAN, Raif searches for answers and instead finds the Phoenicians, strange people that human records claim are indigenous to the planet yet still not understood by humans even after 400 years of sharing a planet.

When the Phoenician Seven Chiefs learn of Raif’s personal quest, they decide to help him. Of course, they’re not just being nice. With the Seven Chiefs, there’s always a Plan!

Review:
I had high hopes for this book, since I loved Conditioned Response (CR) so much. Ms. Baldwin’s writing always leaves me exhilarated and it is no less marvellous here than in book one. I love the Phoenician universe she’s created and the characters who inhabit it. In all respects this is a five star book.

However, I also found myself a little disappointed in it. I would almost call this more of a companion book than a sequel (or rather, prequel). While it’s interesting to see events from Raif’s POV, instead of Shayla’s and it’s great to see said events in greater detail than in book one, there is very little new here. Almost everything that happened in this book was mentioned in CR. Granted, in CR the reader is just told X happened and here you see X happen, it’s still the same series of events and you know the outcome. I just kept waiting for that something more.

Now, having said that, let me also say how much fun it was to see the staid, unflappable Raif as an unsteady newborn and the serious Shayla as an innocent youth. If, like me, you loved CR’s characters its worth reading this book just to see them again and understand a their history a bit more.

I did think Raif’ talents felt a little overemphasised. There didn’t seem to be anything he couldn’t do and it left me wondering how someone so much more advanced than everyone else could possibly be bested by Drammond…ever. Same for the Administrator. How could someone who is able to monitor a whole city not be able to pinpoint the location of his own Heir in that same city? Also, though well written, some of the romance or sexual references seemed to come out out nowhere. For example, one moment Raif is in a high stress, life or death situation, the next he’s deciding to make up with his ex and imagining all the things he could do with her. I had no idea where that came from. It felt a bit like cheap titillation.

All-in-all, though I had a gripe or two, for those who liked CR I highly recommend reading Man Made Man. As a prequel, it would also be perfectly followable for those who hadn’t read CR and wanted to start the series here. Baldwin’s writing is a gem worth exploring.

☆ I also read When Minds Collide (A Phoenician Series Short Story). You can see my review here.