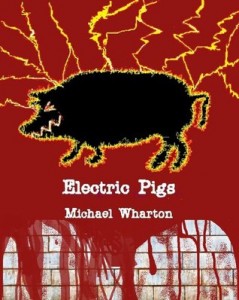 Author, Michael Wharton sent me an ecopy of his new novel Electric Pigs.

Description from Goodreads:
Stan Wragg is sublimely happy in his life as a slaughter man’s mate, stunning section, second rate. He was born to zap pigs, and fate has kindly arranged for him to be employed in that exact capacity at Hopes abattoir in Drearly, just north of Birmingham. Everything is as it should be and all is well with the world, until one day, malign and cruel forces outside of Stan’s control or comprehension decide that things must change.

Review:
Oh, this is a hard book to review. It’s strange. I mean like WTF weird. It also mercilessly refuses to allow anyone to avoid, ignore, or sweep away human ugliness. It’s there and Electric Pigs doesn’t let you forget it for an instant. And while there were moments in which I considered declaring it a pretentious piece of pseudo-intellectualism disguised as ironic absurdism, that wouldn’t be fair to it. It simply isn’t, and not just because a meaningful conclusion is eventually reached.

I would hazard a guess that forcing the reader to face the generally and socially ignored grotesque that surrounds us is part of the author’s goal. I’m not going to pretend to know this for certain, but it’s certainly how I read it.

While I could have done without Stan’s inventive solution to constipation, or half the descriptions of human bloatedness, or the somnolent bestialitism fantasy play, the book wouldn’t have been the same without them. And Stan’s innocent, child-like splendour wouldn’t have had the grimy backdrop on which to shine. Stan makes all of the horridness of his environment worth suffering through. He and his, admittedly dysfunctional and cognitively deficient, family are marvellous.

This book won’t be for everyone. Heck, having read it I’m not even sure it’s for me. It’s not an easy read and I suspect the audience will be limited by its focus on the repugnant as well as the number of people who are able to look past the seemingly juvenile obsession with sex and fecal matter. There will undoubtedly be those who do deem it a ‘pretentious piece of pseudo-intellectualism.’ I’m just not one of them. I’m fairly certain I found meaning in the apparent randomness.

For those who can look past its ugliness Electric Pigs presents a well written, snuggly plotted piece of literary fiction. I sincerely hope that it can find the appropriate audience in front of which to stand tall and garner the praise it deserves.