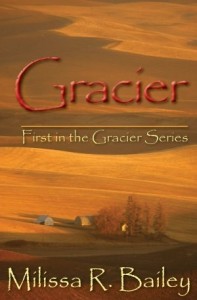 I won a signed copy of Milissa R. Bailey‘s novel Gracier from the Librarything’s Member giveaway.

Description from Goodreads:
Everyone around her knows. Everyone she trusts has lied. And the one man who held the key to Jessica McCabe’s past is dead. Welcome to Gracier, Iowa, a well-kept community with even better kept secrets. Lives are peaceful, streets are quiet, but behind the tranquility is many a tale to be told. Veterinarian Jessica McCabe has returned, but it is not the homecoming she had expected. Her grandfather, Jonas McCabe and Gracier’s longtime vet has died, leaving behind the practice they had hoped to share. The reading of Jonas’ will sets off a series of events that bring into question Jessica’s birthright, the truth surrounding her mother’s untimely death and her grandfather’s sanity. With her world turned upside down she is thrown into a partnership with Matthew Cassidy, the man who chose his family’s wealth over Jessica’s love. Her determined spirit leads Jessica to stay, continue the veterinarian practice and return to the life and community she loves. But a secret loft and a box filled with a hidden past change the course of her life once again. Longtime family friends, Dr. Andrew Harrison and retired Sheriff Chester Caughlin know the truth. A promise made to a dear old friend to protect the girl they helped raise is one they intend to keep. But the wheels of fate have been put in motion. The people entrusted with protecting Jessica from the past are losing control. The small town of Gracier, Iowa holds many secrets and those who have kept the truth hidden are about to discover that not everything has been laid to rest.

Review:
Gracier brings small town Iowa to life. I hope there are still towns out there like that. If so, I want to move there. The book is beautifully written as everything is meticulously described in lovely language. Unfortunately, that flowery prose also slowed the book down a lot. It often came in the middle of some other event or character’s internal monologue and I frequently wanted to rush it along to get back to the meat of the problem.

About half way through chapter two I decided I knew where this book was heading and for a long time it looked like I was right. Then there was a twist (making me only half right). For the last couple chapters there was enough occlusion for me to wonder if the book was going to stay the new course or return to the old, so in that sense it maintained enough of a mystery to keep if from being completely predictable. For the most part I really enjoyed it, but I can’t say I liked all of it.

The basic premise is that Jessica returns home for her grandfather’s funeral and is forced to face someone from her past that she would rather forget. It soon becomes obvious that everyone around her is hiding something and she sets out to find out what. This is all well and good, but despite the whole why of the secret being explained, I didn’t buy it. It essentially comes down to a bunch of men deciding to keep some pertinent information from one woman. They do it for all the best reasons of course, but it’s still far too paternalistic for my taste. I would have wanted the painful truth and would have a hard time forgiving anyone, let alone everyone important to me, hiding it from me. Who are they to decide what’s best for someone else? It would be another matter if she was 12, but she’s well into adulthood. Jessica also seems to have a whole sense of crisis about all of this before she has enough information to know that it should and would cause emotional upheaval. I understand that it was supposed to be Michael’s presence that put her so on edge, but she seemed disproportionately wound up about the whole thing before having enough clues to put her there.

I also didn’t understand Steven’s change of heart. I don’t want to post a spoiler so suffice it to say that after years of pining after one person he suddenly goes and changes his mind with no obvious impetus. It’s great that he did, but why? I also could have done without all the God is great, blah, blah at the end. Luckily it wasn’t nauseatingly overt. All-in-all, I enjoyed the read even if I couldn’t comfortably put myself in the place of the main characters.