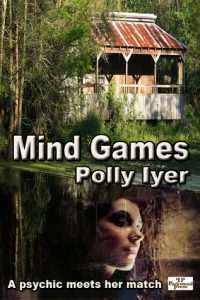 I grabbed a copy of Polly Iyler‘s Mind Games when it was free on Amazon last year.

Description from Goodreads:
During a New Orleans Mardi Gras Ball, psychic entertainer Diana Racine touches the hand of a masked Cyrano de Bergerac and is instantly transported into the icy-cold body of a dead woman submerged in water. As Diana crumples to the floor, water filling her lungs, she hears Cyrano whisper that the game has begun. Diana has been called every epithet in the book: charlatan, cheat, publicity hound…and genius–all at least partially true. But convincing New Orleans police lieutenant Ernie Lucier that her vision of the dead woman is the real thing may be her hardest act yet. He becomes a believer when Diana leads him to the alligator-infested bayou and the woman’s remains. When another vision leads to another body, it’s clear that the two dead women are a prelude to the killer’s ultimate victim–Diana.

Review:
I’m torn about how I feel about this book. The writing isn’t bad, though the first half is better than the second. The pacing is fine and the editing is too. Here’s the thing though, I am just so damned tired of reading books predicated on female victimhood, whose plot hinges on some obsessed man stalking and abusing a woman (or women). How many times have I read this?!!! This book spices it up a little by including psychics, but even that I’ve read before (Example: Conduit, by Angie Martin). And that’s not even the only over used plot device here. Sexual sadist with a history of sexual abuse and identity issues? Nope, neeeevvveeerr seen that one used before. (Silence of the Lambs?) I mean, this book could be ok, except it all just BEEN DONE BEFORE ad nauseam.