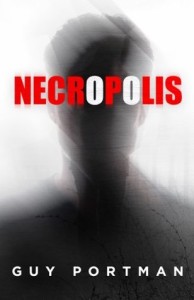 Author, Guy Portman sent me an e-copy of his novel Necropolis. I’ve read it as book twelve of my Taking Care of my Own challenge.

Description from Goodreads:
Dyson Devereux works in the Burials and Cemeteries department in his local council. Dyson is intelligent, incisive and informed. He is also a sociopath. Dyson’s contempt for the bureaucracy and banality of his workplace provides ample refuge for his mordant wit. But the prevalence of Essex Cherubs adorning the headstones of Newton New Cemetery is starting to get on his nerves.

When an opportunity presents itself will Dyson seize his chance and find freedom, or is his destiny to be a life of toil in Burials and Cemeteries?

Brutal, bleak and darkly comical, Necropolis is a savage indictment of the politically correct, health and safety obsessed world in which we live.

Review:
I have to admit to being taken completely by surprise by this book. As the first I’ve read of Guy Portman’s work, I didn’t have anything to base any expectations on. So I didn’t know I was really going to crawl behind the civil mask of a charming, but truly inhumane sociopath. Yes, I know, it’s in the description. But often that means little at all.

There were times I thought the author strove for shock factor, but I was later forced to reconsider this idea. As an example, at one point Dyson engaged in a fairly risqué, drug fuelled threesome that was described in some detail. My first reaction (remembering that I rather like a little erotica in my fiction) was to roll my eyes and tisk at the pointless inclusion of base titillation. That is until I realised the whole thing was relayed with as bland a recitation as Dyson’s appreciation of pastel shirts or distaste for custard creams, and far less virulence than his abhorrence of the cat-in-heat howls of Celine Dion’s music. This is not to say it or any other aspect of the book was boring, but that Dyson’s normal human affect was somewhat lacking and the event therefore held no more importance that a stale repast refreshment or daily grande cafe latte extra hot with soy milk from Starbucks.

And here-in lies the genius of this book—the dichotomous nature of what Dyson sees/thinks/does and the considered visage he presents the world, all contradicted against his utter disinterest in those same individuals. As readers, we are never told Dyson is a sociopath (other than in the synopsis). We are SHOWN his personality disorder in everything he does. It’s subtle but unmistakable. He never remembers names, dehumanises individuals he particularly dislikes (’cause he dislikes almost everyone) as ‘it’ and, even surrounded by the moribund accoutrements of death daily, is unmoved by it.

There is a lot of dark humour here. Dyson is, after all, a well-educated, intelligent, witty man. A lot of this humour is at the expense of the proletariat masses and their/our common, recognisable lives. Disturbingly (considering Dyson’s obvious social imbalance), I agreed with a lot of his opinions—the repugnance of the X Factor as a form of entertainment, the forgeability of the Kardashians as a clan, the omnipresence of banal office chatter, the wretch-inducing encroachment of kitsch tat into otherwise somber environs. All of this makes Dyson a frighteningly relatable, though completely unlikable character. Think Dexter with a British accent.

All of this is wrapped in wonderful prose, interesting speech patters (that never got on my nerves), good editing and a satisfying conclusion. It was an all out win in my books.

2 thoughts on “Review of Necropolis, by Guy Portman”