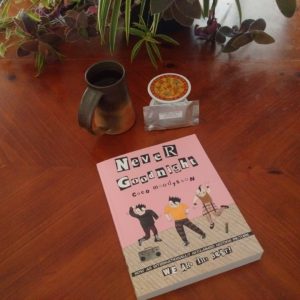 I ordered a tester box from Landfall Freight Co. It’s a subscription box service focusing on graphic novels and comics for girls. I have daughters, after all.  Never Goodnight, by Coco Moodysson was included.

Description from Goodreads:
The cult Swedish graphic novel that inspired the critically acclaimed Lukas Moodysson film ‘We Are the Best!’

Coco, Klara and Mathilda have known each other since primary school, where they met in Folk Dancing class. Now they’re almost teenagers, and their anarchist ideals and dreams of forming a world-beating punk band set them apart from the other girls at school. They can’t play any instruments, practice with pillows and pans, and keep getting told that punk is dead. But they’re not going to let any of those things get in their way…

Published in English for the first time, Never Goodnight is a hilarious and life-affirming memoir that will remind you that all you need in life is your best friends, a can of hairspray and three guitar chords.

Review:
I don’t really know what to say on this. Someone else called it ugly-cute and I think that’s an apt description. It is undeniably cute, as children so often are. But It is also ugly. The drawing style is corse, the characters lumpy and lopsided with a tendency to be shown on the toilet or in other cringe-worthy positions. But it’s about three female, punk tweens in 1982 Sweden. Nothing about them is frilly or girly or pretty and it’s not supposed to be. In fact, this is a lot of what the book is about. They get significant pushback, that they don’t quite understand themselves, for breaking out of that acceptable, pretty, gender norm.

For about half the book I didn’t like it. I thought it was choppy and I didn’t see a theme emerging. By the end however, I was brought around. It ended on a happy note and I was smiling along with it. I guess I’ll have to go find the movie on Netflix now.

What I’m drinking: Something called Coffee Free. It’s a custom blend from Traveling Tea, a local tea shop. (Yes, Coffee Free is a tea. I assume intended as a possible coffee replacement.) The last time I was in the proprietor gave me a sample, so I know almost nothing about it beyond the name and that instructions say brew it at 195° for 3 minutes. But it’s very chocolaty in taste and I got two decent brews out of it.