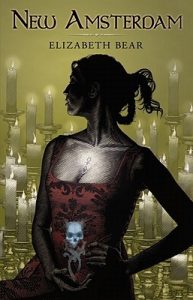 I bought a copy of Elizabeth Bear‘s New Amsterdam

Description from Goodreads:
Abigail Irene Garrett drinks too much. She makes scandalous liaisons with inappropriate men, and if in her youth she was a famous beauty, now she is both formidable and notorious! She is a forensic sorceress, and a dedicated officer of a Crown that does not deserve her loyalty. Sebastien de Ulloa is the oldest creature she has ever known. He has forgotten his birth-name, his birth-place, and even the year in which he was born, if he ever knew it. But he still remembers the woman who made him immortal. In a world where the sun never sets on the British Empire, where Holland finally ceded New Amsterdam to the English only during the Napoleonic wars, and where the expansion of the American colonies was halted by the war magic of the Iroquois, they are exiles in the new world – and its only hope for justice!