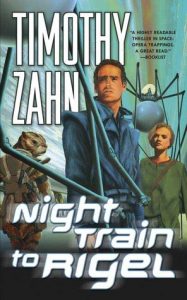 . I promised myself I wouldn’t get to December and have books by author with names starting with I, Q, X and Z, this year. This took care of Z for my alphabet challenge.

Description from Goodreads:
It begins when a man delivers a message for former government agent Frank Compton–only to fall dead at his feet. The message is a summons from the Spiders, the exotic and mysterious creatures who run the Quadrail, an incredible transportation system connecting civilizations across the galaxy. The Spiders believe that someone or something is preparing to attack their entire network and the worlds it serves, by smuggling battleships through the Quadrail–something that should be impossible to do. Compton, with the aid of a beautiful but enigmatic agent of the Spiders, is their last hope.

Because nobody else has been able to find the elusive enemy who seeks to enslave the entire galaxy…and Earth is its next target.

Review:
I think it took me a lifetime to read this book. Ok, maybe it just felt that way because I was bored for so much of it. Honestly, it’s not a bad book. But I felt it went on longer than it needed to, considering the plot was just a guy riding a galactic train back and forwards, following handily laid out clues and reacting to things.

I might have just called a ‘meh’ read, except for one major oversight that I’m so tired of seeing. Zahn created a whole galaxy, full of several planets and a ton of different species. Do you know, there’s not a single woman among them? Not one. Not one rides the train. Not one works in any of the stations. Not one was in a restaurant or hotel. Not one passes the main character on the street.

With the exception of his sidekick, the “beautiful but enigmatic agent of the Spiders,” whose sole character trait is her lack of personality, there is not a single female of any sort in all 300+ pages of this book. AUTHORS, STOP DOING THIS.

This doesn’t happen by accident. This isn’t excusable because the book is about aliens. Not including females in your books is a choice you make and it infuriates me. I will most likely never read another Timothy Zahn book again. Because he’s not a new author, and if he hasn’t fixed this bad habit by this point in his career, he doesn’t intend to and I can’t be bothered with it.