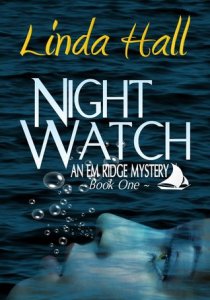 Author, Linda Hall sent me an e-copy of her novel Night Watch.

Description from Goodreads:
Desolate Maine shores… Murder… And peace slipping away on the outgoing tide…

For yacht delivery captain, Em Ridge, having a billionaire’s daughter go overboard on her first captaining job is not a good beginning. The sailboat is new, state of the art, her crew on this trip include two close sailing friends. But an unknown fourth, who can’t even tie a bowline, and the unruly owner’s daughter turn the idyllic trip into an adventure not wanted.

Two years ago Em buried her husband, her soulmate, her sailing buddy, and with him buried a secret. As hours on the open seas slide by, secrets are resurrected that tie Em’s past to a present, awash with murder and deception.

Will Em’s career go overboard? Will the investigating detective help her or hurt her? Any why does the best boat delivery captain on the east coast pull at her heart strings?

The oft foggy coast of Maine holds secrets it does not want to give up, and a lot of bodies can be hidden in The Pine Tree State’s largest city.

Review:  Slightly spoilerish
Honestly, this was almost a five star read for me. The writing is marvellous. The setting is sublime. The character’s love of the ocean is palpable and the mystery, while not hard to figure out, was engaging.

There were only a few things that kept it from being five star worthy for me and most hinge on simplicity, by which I mean simple plot devices. For example, the whole premise of the mystery is that a girl is murdered on a boat, while out to sea. There were only five people on that boat, including the dead girl. Despite this minuscule pool of suspects, Em is never included as one. Instead she’s permitted unprecedented access to case information and even asked to assist the detective. What? Why?

Here’s another one, Em needs information about her husband’s death in order to put things together, then, without being asked or any communication between them a medical examiner decides to start looking at the 18 month old closed case again and sending her information. What? Why would he do that? It’s too simple a solution to a plot necessity.

The big one, though, the one that literally made me set the book aside and play with my social media for an hour, because I didn’t want to have to read any more of it, was Em’s blind spot regarding a certain character’s trustworthiness. She meets up with him for the first time in 10 years, having crewed with him only once before (so they have no relationship, not even a nod as you pass friendship) and because he’s nice to her, she starts having ‘growing feelings’ for him within a day.

But everything about him is suspicious and Em sees that, but she still trusts him in the face of OBVIOUS clues to his ill-intent and tells him everything, even going so far as to pass items to him that people are killing over. And there is no feasible reason she should, none. Nothing in this particular part of the story is believable. Every-time she ran to him and confided everything to him, I asked why and wanted to give up on her. In the end I just had to accept the story needed her to trust him to progress, but that’s not a good enough reason.

There were also a few times things stretched a bit thin. For example, at one point Em finds a clue saying, “The key is somewhere only Em will know.” But when you find out where it is, Em doesn’t know of it and she only learns of it by coincidence. Hmmm

The book also has a cliché, ‘Now that I have you at my mercy, let me tell you everything, answer all your questions and then conveniently botch killing you.’ ending that doesn’t feel all together natural. Plus, she doesn’t so much solve the mystery as stumble into the answer.

Despite these complaints (and some thin characterisation), the book is very good. I enjoyed the fact that Em (with the exception of her interactions with one man) is smart and self-assured. I loved the setting. I liked the non-development of a non-relationship that slipped in at the end, but you can still sense is ‘something.’ They felt very broken but real in the last few pages.

All-in-all, I had a few complaints, but am calling this a general success. I’ll be keeping my eyes on Mrs. Hall’s work for sure.