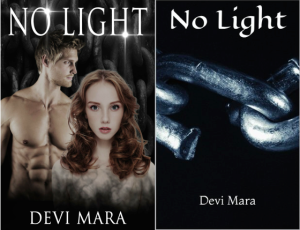 I downloaded a copy of Devi Mara‘s book, No Light when it was free on Amazon. (I included both covers because the one I read had the second cover, but I so hate the new one that I wouldn’t have picked the book up if I’d seen it first. Seriously, that blank, innocent look on the MC’s face screams TSTL. I would have run the other direction from it and I didn’t want to post it here as something I would have been attracted to. Petty, I know.)

Description from Goodreads:
“Name?” he demanded.
“Sarah Mackenzie.” She swallowed hard. She would be like the ones who had fallen, her remains something to be cleaned from the floor.
“Age?”
She tried not to tense when he brought his face to her neck and inhaled deeply.
“Twenty-two.” The lie tried to stick in her throat.
He pulled back and gave her a dark look. “Try again.”
“Eighteen,” she whispered, tensing when his lips pulled back from his teeth in a shark smile.
“A lie, Sarah? How nice that you are not as innocent as you look.”

In The Corridor, there are the immortal Dems and the human handlers who guard them. When the leader of the Dems gets a handler straight out of training, she is not expected to live beyond her first day. She is everything he hates and he is everything she fears, but an accident permanently binds them together. With corruption growing among the humans and the threat of war, they must escape The Corridor and find common ground in a place with No Light.

Review:
This book was at best OK. The actual writing itself is fine, though it needed another edit, but the story is so full of inconsistencies, insubstantial world-building, poor character development and absent emotional growth that it pains me to discuss it.

I’ll start with Sarah. For 2/3 of the book, she is such a limp noodle, so weak and scared of everything that she literally can’t even communicate in complete sentences, just stutters and apologies. Then for the last 1/3, she miraculously, with no apparent instigation for change, becomes a strong-willed, brave, stand-up for herself and those she loves, fighter and I was left thinking, ‘this is not the same girl.’ Her character was wholly inconsistent.

Then there is Farran. He too has an instant and unfollowable change of temperament. For 2/3 of the book, he’s gruff and unfeeling, hates humans and barely tolerates Sarah. Then, he morphed into an expressive, demonstrative, lovely man. What? How? Why?

The plot…it makes no sense. The Dems are imprisoned on what I assume is Earth. They are bigger and significantly stronger than humans. They can see in complete darkness, heal almost instantly and are maybe psychic. But they are guarded by a single person with nothing more than a stun gun. What’s more, they always seemed to be alone with that guard, or at least Sarah and Farran do.

Plus, it’s inferred that Sarah is assigned to Farran because she’s the only day guard in the current training class, therefore the only one available. But what makes a day guard, morning guard or night guard different is never addressed. If it’s just preference for time of shift (and it’s shown guards can change shifts) why does it matter? Even more to the point, couldn’t someone cover the shift long enough for Sarah to at least get trained?

Plus (again), if a Dem has three guards, why is the day guard the only one referred to as ‘his handler?’ What about the other two, do they not count and if not, why not? Nothing about the prison-setting, handler/guard set up makes any sense. NOTHING.

Then there is the Marking (which I suppose is intended as the romance). Farran marked Sarah by accident. That’s right he didn’t mean to and he even actively disliked and was disgusted by her at the time and for most of the book. But that marking, which should take years to develop is unusually strong, but we’re never told why. And in and among all this being disgusted by Sarah and Sarah being terrified of Farran, they’re supposed to have fallen in love. I saw no indication of this until BAM love. But it’s anyone’s guess what it’s based on. She’d hardly even been able to speak to him and he did nothing but snarl and bark at her.

There are also some really cliché scenes. For example, the alternative love interest taking her clothes shopping and changing the ugly duckling into a beautiful swan with the help of his riches and a good sales girl. Meh. This same theme is echoed in Farran picking out Sarah’s clothes for her. Because, obviously, what a girl looks like and how she visually presents herself is sooo important.

Lastly, (or the last thing I’ll mention for fear of appearing to attack a book) some of the plot-devices are extremely obvious. As an example, Farran has no problem understanding humanity or communicating. (In fact, for much of the book I wondered how everyone did communicate so easily—newly arrived aliens even using English when conversing among themselves, for example.) But toward the end he is painfully dense and unable to understand why he’s ineffectively communicated an important point, which leads to Sarah running out and committing the requisite TSTL acts and obviously needing rescue. The set up on that scenario was so obvious I could have provided bullet points before reading it. Similarly, Sarah’s inability to see the obvious so that the author could drag it out as a big ‘Ta-Da’ at the end was worth at least one eye-roll.

The writing does have an appreciable eerie feel to it. I liked Farran’s Colonels. They were funny. I liked that Luke seemed to have a little grey to his character. He genuinely seemed to want to help Sarah, but was in too deep to be able to do it. I liked that the Dems actually committed violence that supported the claim that they were dangerous, as opposed to the reader being told they’re dangerous but never seeing anything to prove it. I’ll even grant that the boook lacked the normal NA angst about sex, for which I’ll thank every literary god there is. So, it’s not that there wasn’t anything I liked about the book. But the dislikes outnumbered the likes by a significant amount. (And the totally sappy ending was my final straw, really. *shudder*)