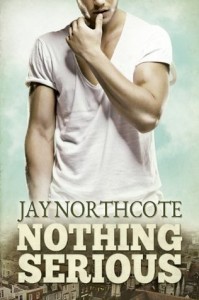 I bought a copy of Nothing Serious, by Jay Northcote.

Description from Goodreads:
Mark O’Brien is finally being honest with himself. His relationship with Rachel is over and he’s moving out of the home they’ve shared for six years. They get along, but he can’t fix a relationship when the person he’s with is the wrong gender.Jamie Robertson, one of the removal men, is huge and ridiculously gorgeous, and Mark is smitten at first sight. When a cardboard box splits, revealing items of a personal nature that Mark never wanted anybody to see, he’s mortified. But it sparks the start of a beautiful friendship with benefits.As Jamie initiates Mark into the joys of gay sex, the two men get increasingly close and “nothing serious” turns into something rather important to both of them. But communication isn’t their strong point. Will either man ever find the courage to be honest about his feelings?

Review:
I have to give this book credit for being EXACTLY what it sets itself out to be in its blurb. However, it is that and only that. There is no more to it. A man breaks up with his girlfriend of 9 years because he finally decides to admit he’s gay. (Mostly because he’s approaching 30 and his mom keeps pushing him to marry her.) Lucky for him she’s the understanding type, who isn’t pissed to also be pushing 30, largely past prime childbearing age (not to mention, what our sexist culture tells women is basically their prime—she was with Mark from roughly age 20-29) and dropped without preamble. While I thought she was far, far too understanding, considering she’d invested 9 years into the relationship, I also appreciate there were no screechy, banshee women here. Also lucky for Mark was that he happened to meet and fall in love with literally the first gay man he comes across after moving out (actually as he’s moving out.) No need to negotiate life as a single gay man in the city for Mark. Things couldn’t have gone any easier for him. I’m tempted to call this PWP, except the fact that the two of them are having a lot of pointless sex kind of is the plot. Somehow, during their downtime they’re supposed to be falling in love, but we’re never really shown these bits of the story. We’re told they happen. For example, Friday nights become pizza and movie night. But I didn’t find the romance particularly believable. Both characters are really sweet and it’s a nice intro to man on man sex, with Jamie being possibly the most patient considerate lover on the face of the earth. So, it’s a pleasant enough read. As the title says, it’s Nothing Serious. An easy, rainy afternoon read.