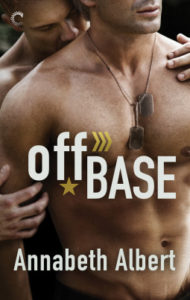 I received a copy of Annabeth Albert‘s Off Base from Netgalley.

Description from Goodreads:
After trading the barracks for a fixer-upper rental, navy SEAL Zack Nelson wants peace, not a roommate—especially not Pike, who sees things about Zack he most wants to hide. Pike’s flirting puts virgin Zack on edge. And the questions Pike’s arrival would spark from Zack’s teammates about his own sexuality? Nope. Not going there. But Zack can’t refuse.

Pike Reynolds knows there won’t be a warm welcome in his new home. What can he say? He’s an acquired taste. But he needs this chance to get his life together. Also, teasing the uptight SEAL will be hella fun. Still, Pike has to tread carefully; he’s had his fill of tourists in the past, and he can’t risk his heart on another, not even one as hot, as built—and, okay, yeah, as adorable—as Zack.

Living with Pike crumbles Zack’s restraint and fuels his curiosity. He discovers how well they fit together in bed…in the shower…in the hallway… He needs Pike more than he could have imagined, yet he doesn’t know how to be the man Pike deserves.

Review:
This was a pretty sweet little romance. I liked the way Albert played with the roles a bit and made the big bad Navy SEAL the vulnerable, confused character. Pike was almost a saint for putting up with Zack as long as he did.

I was a little squinked out with Pike’s insistence that Zack come out of the closet. In a lot of ways that’s the primary plot of the book, Zack coming out, be it for Pike or himself. But he was very clearly in a situation that wasn’t safe to come out in, so the whole inferred, ‘prove your love by coming out’ was uncomfortable for me.

The writing is smooth and easy to read, though the book did feel a little on the overly long side. Lastly, I did not realize until I was done with the book that it is a spin-off of another series (Gaymers). So, for those like myself, who are wary of spin-offs, this one stands on its own just fine. All in all, worth reading.