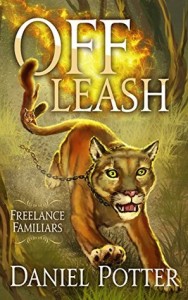 Author, Daniel Potter sent me an ecopy of his fantasy novel, Off Leash.

Description from Goodreads:
When Thomas Khatt awakens to the magical world following the sudden, violent death of his elderly Archmagus neighbor, he doesn’t get the standard package of awesome power combined with a hero destiny. Nope, he trades his thumbs in for a tail, tawny fur and four feet with a very low co-efficient of friction on linoleum. His destiny as one of three talking mountain lions in the magical world? To be sold at auction and bonded to some pimply faced apprentice for life.

Armed only with an impressive set of chompers and buckets of snark, Thomas faces off against a lightning-bolt throwing granny and a sexy union recruiter as he desperately tries hold the threads of his old life together. To stay off the leash he’ll have to take advantage of the chaos caused by the Archmagus’ death and help the local Inquisition solve his murder. A pyromanic squirrel, religious werewolves, and cat-hating cops all add to the chaos as Thomas attempts to become the first Freelance Familiar.

Review:
I was charmed by Off Leash. I enjoyed Thomas’ refusal to accept his given situation and insistence on doing the right thing. The magic was surprisingly well developed and there was an interesting and amusing set of characters that were largely more than shadows on the page.

However, I thought that as hard as Thomas tried to get his human self back, we never fully came to grips with him. I never missed him as anything other than an idea.

Further, I thought the plot took so long to become apparent that it felt non-existent. Let me clarify that. There is a plot, but it ties itself together at the end and up until the last few pages, when all the decisions Thomas makes throughout the book culminate, it just felt like he was running around randomly reacting to stimuli placed before him. It seemed a bit scattered.

Lastly, I had little trouble placing the genre. It’s fantasy certainly, and if it weren’t for the cursing and oblique references to sex I’d call it upper Middle Grade Fantasy (especially with the illustrations that feel geared toward young readers) but there is cursing and references to sex (though not a lot), so…not MG despite feeling MG. The whole thing had a bit of a Terry Pratchett feel, in the sense that it’s sometimes ridiculous just for the sake of ridiculousness. There were a few delicious ironies, humor and some very readable writing. So, if you like that sort of book, pick this one up.