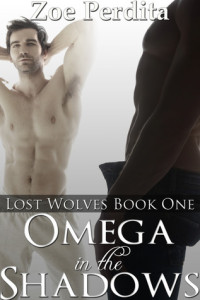 Book three in my Omega Weekend Challenge is Omega in the Shadows, by Zoe Perdita. I picked the book up at Amazon when it was free.

Description from Goodreads:
Rowan Gregor is a CIA agent who vows never to get close to another wolf after his pack is brutally murdered by hunters. Enter Elijah Kane, an efficient and shadowy omega assassin on the run from the CIA. When Rowan is tasked with hunting down Kane, he ends up at the mercy of a wolf with nothing left to lose – a wolf who is sure Rowan is his mate. Elijah Kane is hell bent on proving he’s stronger and smarter than every alpha he meets – including the alpha CIA agent sent to kill him. But Rowan lights a fire of lust that Elijah can’t ignore. They share a rare connection – a mate connection – and he’s not going to give up on Rowan until the man sees it too. Trapped in a snowy wilderness and besieged by hunters, desire sizzles between Elijah and Rowan. Can they overcome their differences, and their pasts, and forge a bond to save their future?

Review:
This is one of those books where when someone asks how it was you seesaw your hand and say, “Hmmm, it’s ok.” That’s what it is, ok, not great but not necessarily all bad either. The story has teeth (Hah, see what I did there?), but it drags on and is quite repetitive, both in telling the readers the same things over and over and in using the same words too frequently. Examples: Assassin (100 times), Omega (149 times), Alpha (297 times)! Most of these in the context of saying, “The Omega” did this or “The Assassin” did that.

I also had a problem with the binary nature of the characters. There only seemed to be alpha and omega. This being emphasized by how often the characters are referred to by their rank (in a non-existent pack) as opposed to names. What would the character be if he wasn’t the most or least powerful wolf? But more disturbing than this was the gay versus straight debate. The argument, “I’m not gay,” “you’re attracted to me, so you’re gay,” “I sleep with women, so I’m not gay,” “you want me, so you’re gay,” *blow job* “I thought you weren’t gay,” “I guess I am gay” was often repeated and utterly ridiculous. One would think being bi just wasn’t a thing. And apparently getting one taste of a penis will miraculously change your orientation and your personality, because Rowan certainly seemed to make a 180.

Then, to top everything else off the book ends on a cliff-hanger; a cliff-hanger that, as far as I can see from reading the blurbs of the other books, isn’t directly picked back up. Book three might touch on it, but I’m particularly confident about that.