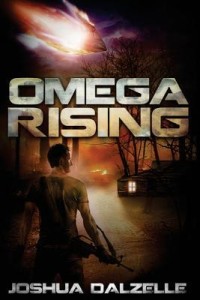 I’ve had Omega Rising, by Joshua Dalzelle in my cloud for almost 3 years. I originally picked it up at Amazon.  I’ve opted to finally read it as the first in my Omega Weekend Challenge. It is the first of six books containing the word Omega in the title and I believe the only one that doesn’t involve werewolves.

Description from Goodreads:
Jason Burke was a man hiding from himself in a small cabin high in the American Rocky Mountains when his simple, quiet life was shattered one night by what he first assumed was an aviation mishap. But when he investigates the crash, what he finds will yank him out of his self-imposed exile and thrust him into a world he could have never imagined.

He suddenly finds himself trapped on a damaged alien spacecraft and plunged into a universe of interstellar crime lords and government conspiracies, along the way meeting strange new friends… and enemies. As he struggles to find his way back home he is inexorably drawn deeper into a world where one misstep could mean his death. Or worse. He desperately wants to get back to Earth, but it may be the end for him.

… or is it just the beginning?

Review:
This was fun. It reminded me a lot of Farscape, which was always a cheesy, guilty pleasure of mine. So, I liked the premise and that really was enough for me to enjoy it. And the plot does roll along at a good clip. But the book has some fairly serious drawbacks, in my opinion.

For one, Jason has no real history or depth to his character. Nor does anyone else. Second, the book suffers from allowing its main character too many successes too quickly. For example, Jason finds himself in space, with no knowledge of anything, and within a ridiculously short amount of time he’s giving technical advice on how to save the ship to a trained pilot. He easily, one might say accidentally, becomes captain of a ship with an exceedingly skilled and loyal crew. He never stresses or gets flustered, even when faced with the impossible. It’s too much. There is literally no challenge that he doesn’t overcome almost effortlessly.

Third, the book needs a bit of editing. It’s readable, but if you pay attention to that kind of thing, you notice. Lastly, since it’s something I’ve decided to start pointing out when I see it, in an attempt to highlight how disturbingly common it is, even today, there are no female characters. Seriously, none, not even a side character or service provider. None.

So, in the end, as a just-for-the-fun-of-it, not-gonna-delve-too-deeply-into-it kind of read it is fun. Not perfect by any stretch of the imagination, but worth reading.