I borrowed audio versions of both On the Edge and Bayou Moon from Hoopla. They’re written by Ilona Andrews and read by Renée Raudman. 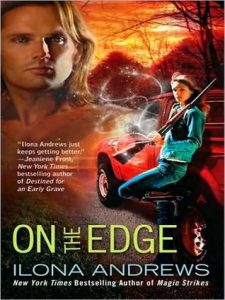 Description from Goodreads:
Rose Drayton lives on the Edge, between the world of the Broken (where people drive cars, shop at Wal-Mart, and magic is a fairy tale) and the Weird (where blueblood aristocrats rule, changelings roam, and the strength of your magic can change your destiny). Only Edgers like Rose can easily travel from one world to the next, but they never truly belong in either.

Rose thought if she practiced her magic, she could build a better life for herself. But things didn’t turn out how she planned, and now she works a minimum wage, off the books job in the Broken just to survive. Then Declan Camarine, a blueblood noble straight out of the deepest part of the Weird, comes into her life, determined to have her (and her power).

But when a terrible danger invades the Edge from the Weird, a flood of creatures hungry for magic, Declan and Rose must work together to destroy them, or the beasts will devour the Edge and everyone in it…

Review:
I went back and forwards with this book, sometimes really liking it and sometimes rolling my eyes. I absolutely liked Rose. She’s awesome, honestly. And I didn’t dislike Declan. I appreciated that, as Andrews so often does, he was a hero unafraid to let his heroine take risks and shine. There was none of the abuser discussed as an alpha romantic partner that I dislike in the PNR/UF genres. But I also never really came to love him either. He was too perfect and more of a caricature than a character. Also too perfect was the sappy, unnecessary ending.

I know it sounds like I didn’t like the book, but I really did. I just never loved it. As a series though, I can see myself wanting to read all of them. I feel the same way about the Kate Daniels books. Individually I always rate them middle of the road, but I want to read them all because I love the world.

I had the audio version and the narrator did an excellent job. I thought Declan sounded too old for the age he was supposed to be, but that was my only complaint. She really did an unusually good job. 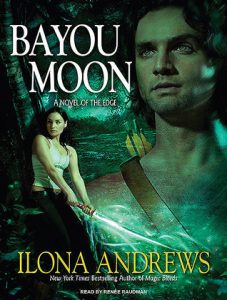 Description from Goodreads:
Cerise Mar and her unruly clan are cash poor but land rich, claiming a large swathe of the Mire, the Edge swamplands between the state of Louisiana and the Weird. When her parents vanish, her clan’s long-time rivals are suspect number one.

But all is not as it seems. Two nations of the Weird are waging a cold war fought by feint and espionage, and their conflict is about to spill over into the Edge—and Cerise’s life. William, a changeling soldier who left behind the politics of the Weird, has been forced back into service to track down a rival nation’s spymaster.

When William’s and Cerise’s missions lead them to cross paths, sparks fly—but they’ll have to work together if they want to succeed…and survive.

Review:
This was a solid 3 stars. I enjoyed it a lot, but wouldn’t go so far as to say I loved it. I thought William was absolutely adorable, Cerise was wonderfully badass and the Mar family was a great bunch of side characters. But I also thought it overly long, the ending a bit rushed (as in all wrapped up a little too easily) and I didn’t need the sappiness at the end.

I listened to this in audio and thought the narrator did an excellent job, much like in book one.