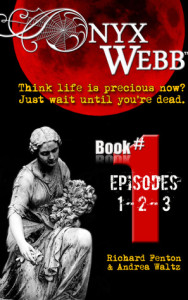 Author, Andrea Waltz sent me, not only a copy of her and Richard Fenton’s book, but a whole ‘blogger kit.’ This was a novel way to promote their book. Having just written a ranty post about some authors putting no effort into a request, I was honestly impressed to find the other end of the spectrum. 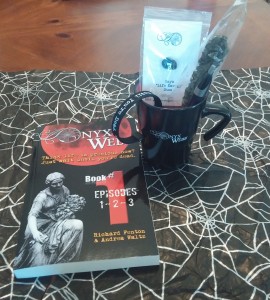 The coffee much shows they’ve paid particular care to the tendency of book bloggers. I may not know them all, but I know very few who don’t regularly post pictures of books and hot beverages. They just go so well together. See, I even used mine (cinnamon tea, if you’re curious). 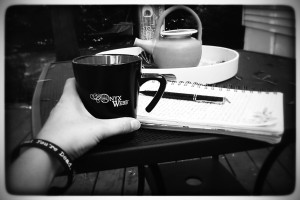 I do have to address the obvious (or maybe not so obvious), since my husband’s laughing response to my daughter when she asked why someone sent me a packages with candy in it (the rock candy was the only item in the box she cared about) was, “Someone sent her a bribe.”

I’m laughing too, but it’s a legitimate comment. So for the record, I sat down to read the book with the intention of pulling no punches, of being as honest about my opinion of it as I am with any other book, free coffee mug or not. However, I will openly admit that seeing how much effort they put into promoting it, I did feel obligated to ensure it sat at the top of my review pile.

What’s the book about:
– It’s June, 1980 and piano prodigy, Juniper Cole is on the way to her senior prom.

– It’s January 2010, and Koda Mulvaney has blown through his 20 million dollar trust fund and is told by his father to return home and get to work.

– It’s August, 1904 and little Onyx Webb is on her way to the famous World’s Fair in St. Louis with her father, Catfish.

Two of the three will see a ghost, one will become a ghost and everyone will learn that life is hard to let go of even when you’re dead. And that’s just Book One. Designed to read like a supernatural soap opera, Onyx Webb is a paranormal suspense series, with supernatural romance, as well as a dash of historical fiction. The stories may haunt you, the darkness may disturb you, but ultimately you’ll be reminded to treasure every moment of your life because… If you think life is precious now? Just wait until you’re dead.

What did I think:
If you could see me, I’d be holding my hand up and rocking it back and forwards in a see-saw movement meaning, so-so. I thought the writing was simplistic, but good. The characters had distinct voices. The editing was clean. The idea was interesting and the authors balanced an impressive numbers of threads that look to be weaving together eventually. An impressive feet when you’re covering over 100 years.

However, we’re all individual readers and we all have literary qualities we do and don’t like. For me two things I’m not hugely fond of is vignettes and leaping back and forwards in time. Unfortunately, that is exactly what this book is. It’s set up so that you follow three primary character arcs in three different eras. What’s more, we were given very brief snippets, sometimes only a page or two for each one before leaping briefly to another and so on.

I can see what the authors were going for with this narrative choice. It was like getting little tastes of something larger. But, for me, it resulted in not being able to sink into the story, as I was always yanked back out with the changing focus.

Similarly, I’m not sure I followed the need for this to be written in episodes. (Unless it was originally written as a serial or something.) The overall impression I was given—from the too-brief chunks of character POVs, having the story broken into episodes and the unusually large number of new, or previously unimportant, characters being introduced late in the book—was that of disconnection. Like these are all puzzle pieces, but they’re all still in the box, yet to be put together.

I did think a few of the characters were a little heavy on their character’s characteristic. They were almost caricatures of their type of person—the rich playboy who doesn’t know the value of money, the cajun bayou man, etc. And I have to admit I thought the pictures felt a little gimmicky.

Lastly, for those to whom such things matter, there does seem to be a religious, or at least spiritual, theme being established in the storyline.

All in all, an interesting read that I think will appeal to the right reader.