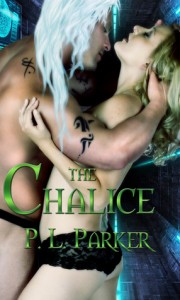 Some time ago I won a copy of P.L. Parker‘s The Chalice from Laurie’s Thought and Reviews.

Description from Goodreads:
Decimated by the savage Deg’Nara and teetering on the brink of extinction, the last surviving males of the once great Chiagan-Se embark on a quest to salvage what is left of their civilization. They send their remaining seeker ships into the void, searching for genetically compatible females. Time is running out, but in the far reaches of the universe, on an obscure and primitive planet, a match is discovered.

One thousand panic-stricken women awaken two hundred years in the future, captives aboard an unmanned alien spacecraft bound for parts unknown! How had they gotten there and why?

The males thought they came willingly. The females believed they’d been kidnapped. Full of hopeful expectation, the Chiagan-Se prepare for the arrival of their new mates. Terrified and furious at the inexplicable abduction, the women prepare for combat! And when the two sides meet, the battle commences.

I made it 45% into the book before there was even a hint of a kiss and a good 250 pages before there was a sex scene. (It was only the first of two and fairly mild to boot.) Relief, not porn then. What it was instead was funny. Now, I don’t mean the trying to take itself too seriously, forcing you to laugh derisively at it funny. No, I mean the genuinely and intentionally humorous type of funny. Danesha, or ‘Dread’ was a whole ball of fun all by herself. Never have I encountered such a bitter and pessimistic character that makes you love her so much. No matter how dire the circumstances you could count on her to think of something worse and lighten the mood. Then there was a little bit of slapstick and all of the basic misunderstandings that one would expect to encounter when two sentient species are forced to interact. I laughed out loud a lot.

Some of the characters were a little stereotypical. Dread was after all a foul mouthed African American from the Detroit ghetto who was always ready for a fight. Then there was the stiff lipped Englishwoman who always kept her cool, the whinging Irish woman who kept wailing ‘I dinnae nooo,’ the busty blond Swede, and the placid Japanese ninja-type. They were a lot of fun though. A little more thought seems to have gone into the male cast. Parker painted them as contradictorily strong, hot-blooded warriors who also happened to feel like lost little boys. I really enjoyed seeing the women take charge. I also enjoyed that there was a plot outside of the romances. In fact I would have liked to have seen a bit more of the smoldering bits. I especially wanted to see how Shagal won his mate over…or was won over. Hard to tell on that one.

On the downside, to say the book head hops would be an understatement. It not only leaps unexpectedly from one person to the next, but from one scene to the next. One moment you are in Kara’s head on a transport shuttle, then the next you are with Tegan on the bridge of the ship, with nothing to indicate you have moved. I often had to reread passages or just keep going until I found a clue to reorient myself by. It was a challenge. Despite this I was pleasantly surprised by the book and look forward to reading more of Parker’s writing.

2 thoughts on “Review of P.L. Parker’s The Chalice”