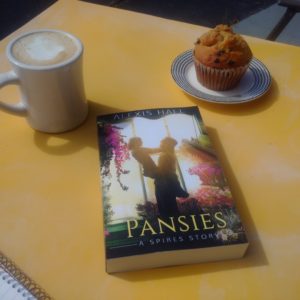 I requested Alexis Hall‘s Pansies from Netgalley. I was approved and then two hours later the paperback showed up in the mail. Apparently, I had forgotten that I’d pre-ordered it. Oops. But it was fortuitous since I ended up reading from both copies and finishing that much faster.

Description from goodreads:
Alfie Bell is . . . fine. He’s got a six-figure salary, a penthouse in Canary Wharf, the car he swore he’d buy when he was eighteen, and a bunch of fancy London friends.

It’s rough, though, going back to South Shields now that they all know he’s a fully paid-up pansy. It’s the last place he’s expecting to pull. But Fen’s gorgeous, with his pink-tipped hair and hipster glasses, full of the sort of courage Alfie’s never had. It should be a one-night thing, but Alfie’s never met anyone like Fen before.

Except he has. At school, when Alfie was everything he was supposed to be, and Fen was the stubborn little gay boy who wouldn’t keep his head down. And now it’s a proper mess: Fen might have slept with Alfie, but he’ll probably never forgive him, and Fen’s got all this other stuff going on anyway, with his mam and her flower shop and the life he left down south.

Alfie just wants to make it right. But how can he, when all they’ve got in common is the nowhere town they both ran away from.

Review:
This is a truly beautiful book. Now, I’ll admit I’m biased, as Hall is one of my favorite authors and I’m kind of predisposed to like anything he writes, but I did very much enjoy this. The writing is lush. The romance so…well, so sweetly romantic you could almost scoop it up with a spoon. Both characters are distinct and likable. Hall even managed to make Fen’s forgiveness believable, which in the beginning I didn’t think was possible. Apparently, I’m a horrible person because I didn’t think Alfie deserved it.

Now, as with most of Hall’s books (maybe all, but I’m not a fan of definitives) all that lush writing can come across as painfully purple at times and this one may have been even more descriptive than normal. I think it’s lovely, but someone with little patience for such will probably not call this a winner. I also thought a few sections stood out as notably stuttered, in that they lacked the same level of flourish as the rest. Personally, I could have done with a little less sex, but I did really appreciate what Hall did with the sex he included. There are mishaps, and affection and a broad definition of what qualifies and very little penetration politicking (yes, I made that up), beyond Alfie’s engagement of his own injurious beliefs.

In all honestly, Alfie coming to terms with his own misconceptions and past self, with his own thoughtlessness, his own inability or unwillingness to consider the effects of his actions on another, or even to consider that he should consider such things was my favorite part of the book. Haven’t we all known (or been) that youth at some point?

I won’t call this my favorite Hall book. There’s little chance a contemporary romance could ever claim that title for any author, it’s just not my preferred genre, but this is definitely worth picking up. There is more emotion in this book than in most of what I’ve read this year put together.

What I’m eating/drinking: An extra hot latte from Webster Groves Garden Cafe (my local coffee shop) and, what turned out to be a chocolate chip muffin. I thought it was blueberry when I pointed to it in the display case. But honestly, how disappointed could I be?