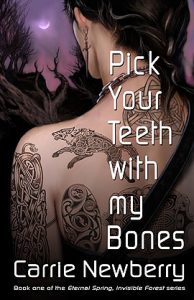 Description from Goodreads:
Tattoos. Scars. Wild black-and-silver hair. A near-permanent scowl. A collection of knives, and a vocabulary to make an oil rig captain blush like a virgin. Not to mention the tail. No one ever accuses shape-shifter Kellan Faolanni of being beautiful, but she’s very good at her job. Until now.

Kellan is a member of the secret Sankhain society, protectors of a deep and ancient forest magic, and their most devout warrior. When a man appears, smelling of Earl Gray tea and old books, he unravels secrets of the Sankhain that should no longer exist, secrets Kellan lives to protect. With the help of Tony, another Sankha, and her dog Galen, Kellan uses her unique sense of smell to follow the trail of lies leading to the traitor bartering Sankhain secrets. Answers hide in the very heart of the forest. What she uncovers there will shake her world to the core.

Kellan is over two hundred years old, and she’s living proof that you’re never too old to learn who you are.

Review:
This wasn’t wholly bad. It had an interesting idea, but it also had several elements that irritated me. The most obvious of which was the “strong woman” equals emotionally stunted, angry woman. I see this all the time. Authors want to write a strong, warrior woman, but they don’t know how to craft a warrior, except to give them male characteristics. As if a woman can’t possess female qualities and still be strong and warrior-like. The result is a woman so angry, sarcastic and emotionally illiterate that the reader is left wondering how she’s lived 200+ years.

What’s worse, she’d been in a sexual relationship with her boss for 180+ years without ever realizing that she wasn’t an equal in that relationship. She was so incapable of forethought and rational behavior that a 24(ish) year old boy showed up and she basically handed all decision-making off to him. Pair all this with the fact that she had lustful thoughts about every pretty man she encountered and formed unwanted attachments, and it made her feel stupid and child-like, as if she couldn’t control her temper, her thoughts, her actions, or her libido.

I’ll grant that a lot of the banter was funny and I do like the idea behind the world. I also appreciated the presence of some racial and sexual diversity in the cast. Even if of the four LGBT characters, the only gay man was mauled, one of the lesbians died and one turned out to be a villain. (That’s not really a resounding success for the LGBT crowd. There’s a trope named Bury Your Gays for a reason. This is sadly a rather common outcome of LGBT characters.)

All in all, I liked the idea of this book but thought it’s presentation was clumsy enough to detract from my enjoyment of it.