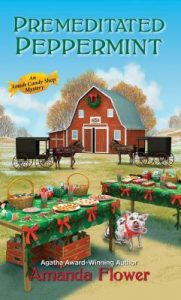 I won a copy of Amanda Flower’s Premeditated Peppermint through Goodreads. Early November may seem an odd time to read a book set around Christmas, but I try to fill my Little Free Library with holiday books in December. So, I wanted to go ahead and get this read and added to the stock.

Description:
Christmas is Bailey King’s favorite time of year. For her first Yuletide in Harvest, Ohio, the former big-city chocolatier is recreating a cherished holiday treat: peppermint combined with molten white chocolate. But her sugar high plummets when her former boyfriend walks into the candy shop she now runs with her Amish grandmother. New York celebrity chef Eric Sharp and his TV crew have arrived to film an authentic Amish Christmas. Bailey’s not about to let her beloved town–and Swissmen Sweets–be turned into a sound bite. Unfortunately, she gets more publicity than she bargained for when Eric’s executive producer is found strangled to death–and Eric’s the prime suspect.

With Bailey’s sheriff deputy boyfriend out to prove Eric’s guilt, her bad-boy ex tries to sweet-talk her into helping him clear his name . . . and rekindle their romance to boost ratings for his show. Now, between a surplus of suspects and a victim who wasn’t who she seemed, Bailey’s edging dangerously close to a killer who isn’t looking to bring joy to the world–or to Bailey–this deadly Noel . . .

Review:
I can’t say I truly loved this. I suppose that if you’re really into cozy mysteries you might like it a bit more. Certainly, the writing is fine. (I thought a tad forced at times, with names used too often in dialogue. Mostly fine though.) However, I seriously disliked one of the characters, thought another was painfully cliche, and I had a serious issue with this being categorized as an Amish mystery.

Specifically Premeditated Peppermint calls itself an “Amish Candy Shop Mystery.” And while the argument could be made that the emphasis is on Amish Candy shop, not Amish mystery, I still think the selling point is meant to be that this is a book about Amish characters. There are Amish people in the book, but (and here’s my beef) THE MAIN CHARACTER IS NOT AMISH.

I suspect (though I don’t know) that Flower has some Amish connection in real life. The culture is treated respectfully and the book does address some of the difficulties of navigating non-Amish life as an Amish person. The rules and mores are repeatedly dismissed by outsiders as flexible, for example, and the main character is considered Amish by those same outsiders for her mere association with the community. While all that may be true, the Amish community is still just window dressing on the book. It’s what makes the world-building different from other cozy mysteries. And in the end, I was uncomfortable with it; side-eyeing and wondering where exactly the line of appropriation really is.

Outside of that big issue, I also thought it inappropriate Bailey inserted herself into a police investigation, thought the pushy mother shipping Bailey and her son before they’d even had a date too much to believe, and the mystery wasn’t hard to figure out at all. As a side note, I was able to follow it just fine without having read the previous books.

This is not to say the book is without merit. It was cute, had some good quips and is as squeaky clean as anyone could hope. It seems to have just not been the book for me.