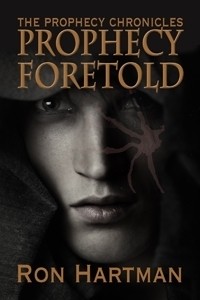 Author, Ron Hartman sent me an ecopy of his novel, Prophecy Foretold, for review.

Description From Goodreads:
These are dark days for Naphthali. The king has been murdered, the land invaded by the Imperial Army. It will absorb Naphthali into an Empire that stretches across all of Enialé at any cost. The ravaged people cling to an ancient promise, an assurance that a prophesied savior will come to set them free.

Daniel Martin is trapped in a life that hasn’t gone as expected. His pharmacy is struggling and he is losing all hope of making a difference in his patients’ lives. His family is the one shining light in his disenchanted life, but he is torn from them when an accident draws him to Naphthali. The people need him, but Daniel is driven by his need to return to the family he loves. Is he the Prophesied One? Only time will tell as both the Empire and the Resistance battle for Daniel while the fate of Naphthali hangs in the balance…

Review:
*groan* I found this deeply dissatisfying. The writing was fine and, though I noticed a couple missing words and such, I had no complaints about the editing. I just plain found the whole thing dull, dull, dull.

Yes, there where plenty of skirmishes. Violence was a constant threat throughout the novel. But Daniel basically traveled for the course of the ENTIRE novel. I’m serious. He got picked up by one army, that schlepped him against his will in one direction. Then he got rescued by another one and marched the other direction. He was still dragging himself forward as the novel ended. He traveled from the beginning to the end of this book and when it looked like he might get where he was going and the story actually finally begin…the book ended. There was no payoff at all.

I can’t even say it was character driven and garner enjoyment in that manner. You don’t get to know anyone deeply because there is so little conversation. What’s more, the bad guys are very bad and the good guys are predominantly very good. No sense of moral ambiguity or grey to them.

As an example, every soldier of the opposing army is, without exception, is a raping, murderous villain. They kill indiscriminately and rape or threaten to rape every single woman they come across and we’re given a few near misses of raped children (both girls and boys). They are dysfunctional evil. By which I mean, a group of men can only commit so many open atrocities before even a cowed populace will risk death to rebel. These characters were so openly vile that they became caricatures of themselves and were utterly unbelievable. There was no depth to them at all.

All in all, Hartman can write and I appreciated that the hero was middle aged and out of shape (in other words, normal) but this book drags interminably. It just never picks up any speed. Though there is an interesting idea here, I have no interest in continuing the series.