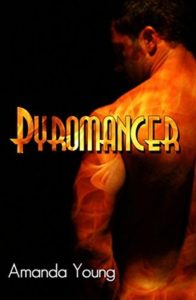 I downloaded a copy of Amanda Young‘s Pyromancer in March of this year, when it was free.

Description from Goodreads:
Christian Ryder is cursed with pyromancy, a deadly ability he has difficulty controlling. Having hurt lovers in the past, he has sworn off personal attachments.

Tanner O’Bannon is broke and desperate. The recent loss of his father has thrown Tanner into a tailspin of debt he can’t afford to pay. Working as a rent boy allows him to pay the mortgage and his college tuition, but it’s burning away his soul in the process.

Through the machinations of an escort agency these men are thrown together. Smoldering embers of desire fan the flames of love, but will it be enough to make Christian overcome his fear of love, or to save Tanner from the fire?

Review:
The writing here is actually pretty good. The language is perfectly readable and though the editing is a little rough, it’s not overly distracting. Plus, the characters are likable. However, the story itself is a bit of a flop. It’s a shame too, because I think it has a lot of potential that just isn’t developed.

To start with, the pyromancy didn’t seem to have anything to do with anything. In the beginning we’re told this is a huge problem in Christian’s life and it keeps him from being able to live normally. Then, for 90% of the book he goes about life just fine, with no ill effects from the pyromancy at all. In fact, it’s not even mentioned for the vast majority of the book.

This pattern of telling the reader that a character is unable or unwilling to do something and then having them blithely turn around and do it is repeated several times in the book. In fact, it was so prevalent that the whole book felt compromised by it. In a very real sense the plot is based on the stated fact that Christian can’t have close ties to anyone and then he falls for the first person he sees, develops deep feelings for them and nothing bad happens. And we’re not led to believe this was a mistaken belief on Christians part, but a departure from past events. I have to ask why.

To complicate this compromised feeling, the world isn’t at all defined. The reader is never told how or why Christian can control fire, or if anyone else can.

Lastly, and completely a personal pet peeve, but the author uses ‘his lover’ to describe the characters during emotional scenes and I thought that distanced them to the point I couldn’t wholly connect. And, even worse, Tanner is referred to as ‘the kid’ for a lot of the book, especially during sex scenes. Sorry, I get a little wigged out by that. I know ‘the kid’ in question is 20 to Christian’s 32, but it still makes me a little twitchy.

All in all, it was an ok read, but not more.