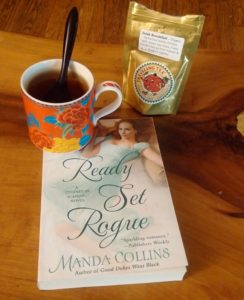 I won an ARC of Ready Set Rogue, by Manda Collins, through Goodreads:

Description:
When scholarly Miss Ivy Wareham receives word that she’s one of four young ladies who have inherited Lady Celeste Beauchamp’s estate with a magnificent private library, she packs her trunks straightaway. Unfortunately, Lady Celeste’s nephew, the rakish Quill Beauchamp, Marquess of Kerr, is determined to interrupt her studies one way or another…

Bequeathing Beauchamp House to four bluestockings—no matter how lovely they are to look at—is a travesty, and Quill simply won’t have it. But Lady Celeste’s death is not quite as straightforward as it first seemed…and if Quill hopes to solve the mystery behind her demise, he’ll need Ivy’s help. Along the way, he is surprised to learn that bookish Ivy stirs a passion and longing that he has never known. This rogue believes he’s finally met his match—but can Quill convince clever, skeptical Ivy that his love is no fiction?

Review:
I’d give this a 2.5-3 stars if I was using stars, here on the blog. I very much appreciated that Ivy was self sufficient and frequently acted with a lot of agency. I liked that there was a character likely meant to be on the autism spectrum, a severe introvert and a single mother who had overcome her own past trauma.

However, I felt the plot was a weak one. It’s basically insta-lust that bloomed into love out of nowhere and the mystery was just an excuse to throw the characters together. This impression solidified when the villain announced themself before the characters identified them and told their whole plan, start to finish, with no prompting. Such that the characters didn’t really have to solve the mystery in the end. I also felt cheated that after all the build up, we never saw the end result of the romance. That was all off page.

My main complaint however was that Quill, the hero, notably WAS NOT A ROGUE. If I pick up a book called Ready Set Rogue, I expect a rogue. Quill is a single man in a historical romance novel, and I suppose the term rogue is morphing to mean just that, but I still consider a rogue a ‘dishonest or unprincipled man,’ a ‘knavish person’ a ‘scoundrel.’ Quill is polite, principled, loyal and not even a player. He’s a gentleman in every way—politically, socially and behaviorally—NOT A ROGUE. This annoyed me to no end.

I was reading an ARC and there were some pretty significant discrepancies in the time line and contradictions in event, but I have every faith that these will be cleaned up before the book’s final print run. That the repetitive phrasing, over-use of ‘bluestocking,’ and anachronistic language will be isn’t as guaranteed, but it was readable even as an ARC.

As an aside, I don’t think the cover fits the tone of the book or the description of Ivy (who was curvy with glasses), but that’s just my opinion. I’m not a huge lover of historical romances, so there’s a chance someone who is will overlook those things that so annoyed me. All in all, I found it to be an OK read, not bad but not very good either.