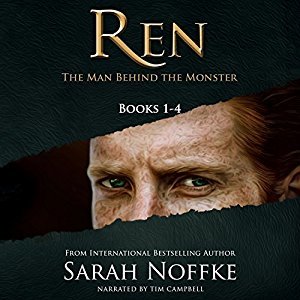 I received a copy of Sarah Noffke‘s Ren: The Man Behind the Monster from the author, through a giveaway.

Book 1:
Born with the power to control minds, hypnotize others, and read thoughts, Ren Lewis is certain of one thing: God made a mistake.

No one should be born with so much power. A monster awoke in him the same year he received his gifts. At ten years old. A prepubescent boy with the ability to control others might merely abuse his powers, but Ren allowed it to corrupt him. And since he can have and do anything he wants, Ren should be happy. However, his journey teaches him that harboring so much power doesn’t bring happiness, it steals it. Once this realization sets in, Ren makes up his mind to do the one thing that can bring his tortured soul some peace. He must kill the monster.

Book 2:
Ren Lewis has the life he’s always wanted: the perfect woman and the perfect job as an agent for the Lucidites, fixing problems before they happen. And yet, he’s still miserable.

He blames the monster buried inside of him for his problems. But what this redheaded Brit doesn’t realize is his life is about to be intensely transformed. Problems that he never could have fathomed begin to surface one at a time until his life quickly spirals out of control. Ren, who has never considered himself quite human, is about to learn just how flawed and vulnerable he really is. There just might be problems he doesn’t have answers for, villains he can’t defeat alone, and a heart in his chest that is actually capable of breaking. Readers witness a new side to this man, a side that will make him, if for only an instant, appear human. This powerful genius will meet his match. And she has the ability to do something special. She can break Ren Lewis.

Book 3:
Ren Lewis, who has faced every danger known to man, is about to meet a challenge he’s convinced has the power to undo him.

When he discovers that his daughter, Adelaide, has been hiding a pregnancy he goes into hiding himself. Having a daughter was one catastrophe he struggled with. But now, being expected to welcome her baby into his home is not something Ren knows how to assimilate into his life. With a new ferocity he throws himself into his work in order to avoid family responsibility. And there’s enough work to keep him occupied with Vivian Bishop trying to infiltrate American homes, intent on controlling and manipulating their residents. Ren soon realizes that Vivian is his perfect enemy. She’s strategic, brilliant and stunningly beautiful.

He’s encountered every danger known to man. Due to his powers as a Dream Traveler and unstoppable work ethic, he’s experienced more than any human alive. But Ren is about to have a brand new experience.

He’s being dragged on a family vacation.

Book 4:
Ren Lewis is the most powerful man in the world and he’s about to prove it.

Ren: The Man Behind the Monster (Book #1)
This was ok. It’s perfectly readable, the narrator did a good job and it’s part of an interesting world. The thing is that I didn’t know that all of Noffke’s series are set in the same world when I started this, so I was surprised. That would have been fine though, except that Ren is OBVIOUSLY a character from another series. And since Ren gets mixed up with the Lucidites society, I imagine he’s a character in the Lucidites series.

The book does stand alone. But you can still tell it’s a spinoff. You can FEEL it. The book is basically the highlights of one man’s 45 year life, starting at about 7. As you can imagine, that doesn’t leave room for a lot of detailed exploration. It’s his first person recount of living his life. Several times he references other occurrences or people, but says he’s not telling that story and instructs the reader to find that book.

I’ve not read any of the Lucidties books, but I’d bet even money that at least some the events that Ren talks about are the events of those books from his perspective, instead of whomever lives them in the other series. This was not enjoyable for me, to just get a bullet point version of something with instruction to go find it elsewhere if I want more.

What’s more, I found Ren a seriously unlikable character. I found it hard to spend a whole book with a bitter, narcissistic, unpleasant man. I suspect you’re supposed to read this after whatever other books he shows up in and already like him. You’re supposed to know him and want his tragic backstory. Because that’s what this feels like. It feels like the author decided she liked a character in another book and decided to give him his own backstory. It’s readable, but without previously knowing or caring about the character I found him lacking.

I’ll be finishing the compilation, because surely the rest can’t continue as the first did. But so far, I’m not thrilled with Ren.

Ren: God’s Little Monster (Book #2)
I enjoyed this book more than book one. In book one I really felt enjoyment was dependent on having read other series by the author. Ren is an exceedingly arrogant and unpleasant character and I found I couldn’t like him. But I expect that those who had read the other series encountered Ren after his redemption and came into the book liking him, but knowing he used to be a little shite. I’d not read another series with Ren in it, so I only knew him as the little shite.

But I have the 4 book compilation, so I took a little break after book one and then came back for book two. And I mostly enjoyed it. Ren is somewhat redeemed and in all his arrogance he really is funny. Pair this with the fact that those around him understand him and aren’t hurt by the hurtful things he says, they enjoy the scathing wit, and he becomes a lovable rogue.

So, I enjoyed him. I enjoyed seeing him reflected in the new addition to his life. But I generally thing the reveal at the end was one step too far. We’ll see how it works out in book three before I make a final decision on that.

My primary problem with this section of this series, and it’s one that will carry over into the next book as it was not concluded here (giving this a SERIOUS middle book syndrome) is that the plot is sooooo common. Question: How many times have you encountered a female villain who is obsessed with plotting world domination with a man who isn’t actually with her? The man being the hero. Me? This is the second time I’ve read this plot this week! It’s a plot that simultaneously makes no sense to me but is also painfully common. Plus, can a woman not be a villain, seeks to rule without it involving a man? Do we really need a man as our motivation in every single darned book?

Otherwise, the writing is good and the narrator is doing an excellent job. Onward and upward.

Ren: The Monster Inside the Monster (Book #3)
A third book in a series is hard to review. What do you say that hasn’t been said before? The characters are the same. In the case of this series, which is all parts of the same over-arching storyline, the plot is much the same. You’re basically left with a review that says, I liked this one more or less than the previous two. And I liked it about the same.

It’s holding steady at a 3-star read. I’ve gotten comfortable enough with Ren to appreciate his sarcasm (though he’d never call it that) and I think it’s cute the way everyone else thinks it’s cute too. He’s like an adorable spikey hedgehog.

Like in the previous book, the problem I had with the book was the mystery plot. I just don’t buy the “girl was obsessed with him, planned world domination to be with him, was smart enough to pull it all off, but left the giant back door open for Ren to cancel it all out with ease” plotting. Nope, it was far too easy.

Further, I thought he pushed Dahlia too far in this one and she should have walked. I appreciate that he showed personal growth in knowing he should have felt guilty (where in the past he wouldn’t have), but why does Dahlia put up with it?

And the baby plot still has me shaking my head.

Ren: The Monster’s Adventure
Amusingly absurd, but a little sappy and with a rushed change in Ren’s perspective.

Ren: The Monster’s Death (Ren Series #4)
I’m not sure what happened here, in this volume of the Ren Series. But it was a mess, not nearly as put together as the last three books. It felt rushed and barely put together. What’s more, I refuse to accept hand-waving, “invent these never before possible things and do it within a week” plot points. And the ending was just ridiculous.

The narrator Tim Campbell, however, did a wonderful job with all it.