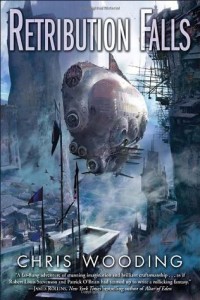 I picked up a copy of Retribution Falls, by Chris Wooding, from my local library.

Description from Goodreads:
Sky piracy is a bit out of Darian Frey’s league. Fate has not been kind to the captain of the airship “Ketty Jay”–or his motley crew. They are all running from something. Crake is a daemonist in hiding, traveling with an armored golem and burdened by guilt. Jez is the new navigator, desperate to keep her secret from the rest of the crew. Malvery is a disgraced doctor, drinking himself to death. So when an opportunity arises to steal a chest of gems from a vulnerable airship, Frey can’t pass it up. It’s an easy take–and the payoff will finally make him a rich man.

But when the attack goes horribly wrong, Frey suddenly finds himself the most wanted man in Vardia, trailed by bounty hunters, the elite Century Knights, and the dread queen of the skies, Trinica Dracken. Frey realizes that they’ve been set up to take a fall but doesn’t know the endgame. And the ultimate answer for captain and crew may lie in the legendary hidden pirate town of Retribution Falls. That’s if they can get there without getting blown out of the sky.

Review:
I find myself stuck in the middle of the road about this book. I find that I simply disliked the main character. I’ll grant that there was a lot of personal growth throughout the book and a lot of what I disliked about him also made him a much more realistic character than many other such characters in the genre (which is all good), but when it comes right down to it, I didn’t enjoy the time I spent with him. Thus, I just didn’t much enjoy the book.

It did have a lot of dry wit and humour in it. It did have an interesting crew and a lot of action and adventure. The writing was tight, if occasionally a bit repetitive. So, there is plenty to like here for another reader. But for me it was all overshadowed by my dislike of Frey (and by extension his treatment/the book’s representation of women).

When I checked this book out of the library, I also got the sequel (The Black Lung Captain) but I don’t think I’ll bother reading it. And that probably tells you as much as anything about where I stand on this book.

Edit: I’d like to link readers to this review. It highlights the thoughts I was too lazy to pull together beautifully.