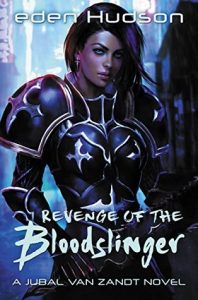 Description from Goodreads:
Narcissist, sociopath, and shameless backstabber Jubal Van Zandt is the best damn thief in the history of the Revived Earth…and he won’t shut up about it.

But not everybody in the swampy, soggy, feudal future approves of Jubal’s vocation. The Guild—the religious fanatics who helped rebuild civilization after the collapse—in particular are waiting for their opportunity to slip the noose around his neck.

Which is why when the renowned Guild knight Carina Xiao—a.k.a. the Bloodslinger—contacts Jubal about an off-the-books job that violates Guild Law, he’s too intrigued to say no. He is the best damn thief in the history of the Revived Earth, after all.

Half bizarro ecopunk, half outworld thriller, half odd-couple roadtrip, Jubal Van Zandt & the Revenge of the Bloodslinger is a 150% futurepunk quest for blood and betrayal across the Revived Earth.

Review:
I enjoyed this a lot more than the cover suggested I would. Both the main character and his client, Carina, are serious anti-heroes. And while she has her faith, they are otherwise both sarcastic, irreverent and capable in their own fields. There is a lot to enjoy here. Not least of which is the interesting histories of both characters.

Plus, it’s never even suggested that Jubal might be neuro-atypical (by which I mean autistic in some manner) and maybe the author never meant him to be, just a narcissistic sociopath. But there were just so many small example of his behavior that made me think he must be—racing thoughts, occasional overwhelming need for movement, minor self-harm when confronted with emotions, a general lack of empathy or normal emotions, insomnia, germ phobia, food issues, inexactitude in measuring the passage of time, strict categorization of people, etc. I appreciated finding this in a character.

My main complaints are that it went overboard on occasion, ends very abruptly and I didn’t at all like the ending. I see what the author is doing with it, but it soured the book for me a bit. Be that as it may, I’d still read another one.