I borrowed the first two books of Suzanne Johnson‘s Sentinels of New Orleans series, Royal Street and River Road from my local library. 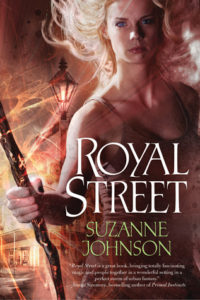 Description from Goodreads:
As the junior wizard sentinel for New Orleans, Drusilla Jaco’s job involves a lot more potion-mixing and pixie-retrieval than sniffing out supernatural bad guys like rogue vampires and lethal were-creatures. DJ’s boss and mentor, Gerald St. Simon, is the wizard tasked with protecting the city from anyone or anything that might slip over from the preternatural beyond.

While winds howled and Lake Pontchartrain surged, the borders between the modern city and the Otherworld crumbled. Now, the undead and the restless are roaming the Big Easy, and a serial killer with ties to voodoo is murdering the soldiers sent to help the city recover.

To make it worse, Gerry has gone missing, the wizards’ Elders have assigned a grenade-toting assassin as DJ’s new partner, and undead pirate Jean Lafitte wants to make her walk his plank. The search for Gerry and for the serial killer turns personal when DJ learns the hard way that loyalty requires sacrifice, allies come from the unlikeliest places, and duty mixed with love creates one bitter gumbo.

Review:
Entertaining, but lacking in pizzazz. This held my interest. I was never quite bored. But I was also never quite enthralled either. It felt a little flat. I thought Alex, the main love interest (there appear to be three) was a jerk. Jake, the second, was a caricature of a boy scout and Jean, the third, was the most interesting but least likely. Further, I saw no reason for three possible love interest, who all saw some mystery quality to this mousy, bland wizard. DJ, herself, never grabbed me. She seemed capable enough, for all she was under trained and kept in the dark for her whole life. But I just never related to her or cared for her much.

The fact that the events of the book happened during hurricanes Katrina and Rita could have been interesting, and I’ll admit it was handled respectfully, but I also felt like it was never fully engaged with. It was a plot device and little more and DJ came out of it amazingly unscathed.

The conclusion felt a little deus ex machina and rushed. But I’ll be reading the second in the series, so not a total bust. 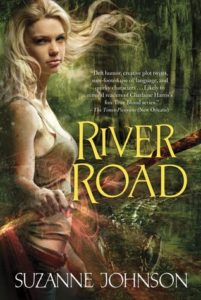 Description from Goodreads:
Hurricane Katrina is long gone, but the preternatural storm rages on in New Orleans. New species from the Beyond moved into Louisiana after the hurricane destroyed the borders between worlds, and it falls to wizard sentinel Drusilla Jaco and her partner, Alex Warin, to keep the preternaturals peaceful and the humans unaware. But a war is brewing between two clans of Cajun merpeople in Plaquemines Parish, and down in the swamp, DJ learns, there’s more stirring than angry mermen and the threat of a were-gator.

Wizards are dying, and something—or someone—from the Beyond is poisoning the waters of the mighty Mississippi, threatening the humans who live and work along the river. DJ and Alex must figure out what unearthly source is contaminating the water and who—or what—is killing the wizards. Is it a malcontented merman, the naughty nymph, or some other critter altogether? After all, DJ’s undead suitor, the pirate Jean Lafitte, knows his way around a body or two.

It’s anything but smooth sailing on the bayou as the Sentinels of New Orleans series continues.

Review:
My opinion of this book was much like that of the first in the series. I enjoyed it, but found it a little on the flat side. Granted, less here than in the previous book, as there wasn’t so much time dedicated to self-discover and whinging on DJ’s part. But there was still a lot of wandering about, going on dates, eating, etc that slowed the pace.

Similarly, I’m still baffled about why we need three men actively pursuing her, and the introduction of two more that will likely try in the future. It’s becoming a bit like a harem and I find that annoying and distracting. Especially since this isn’t primarily a romance and she isn’t really all that impressive.

The mystery was interesting and kept my attention, though I thought having someone die because he was enthralled to the villain was an exact repeat of book one and the motivation for the murder seemed a bit weak. Lastly, there were three unaccounted for years between the first book and this one. That’s a lot of time to pass without the reader knowing what happened. Ostensibly, DJ should have grown and improved at her job in that time. In fact, that seemed the only reason to let so much time pass. But she still seemed be floundering and hanging on by the skin of her teeth and all the men in her life seemed to have just been on pause for that time because they picked up exactly where there were left at the end of the first book, three years earlier.

All in all, I liked it enough to keep reading the series (my library has the first four), but not enough to call it a new favorite or anything.