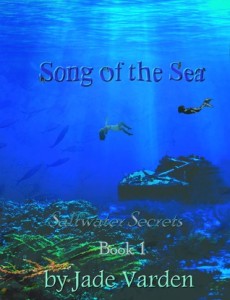 Author, Jade Varden sent me an ecopy of Saltwater Secrets for review.

…Until I was forced to go out into the water, anyway. Out there, you feel really lonely. But you’re never alone. There is more life and emotion under the waves than most humans will ever see, more than I could have ever imagined. Down there, it’s an entire world of rage and hate, love and hope. It’s a world of fear.

It’s a world of war.

Once, my mother told me she would sing me a song of the sea. But under the waves, the only music I ever heard was the sound of screams.

Review (spoiler warning):
This was a pretty middle of the road read for me, even if I don’t factor in being burned out on YA.

Actually, lets do factor the YA in for a minute; not me being burned on it, but that the character was supposed to be 15. I found this extremely unbelievable and many, many times throughout the book had to remind myself of it because I kept forgetting. Let’s just list some of the reasons, shall we? And we’ll skip the mystical or paranormal ones.

1) She takes a boat and successfully navigates and sails to Bermuda, stopping and berthing the boat at various marinas along the way. Apparently, no one thought it odd that she be on her own.
2) She walks into a pawn shop in a country she’s never been in and doesn’t speak the language and pawns a handful of pearls for an appropriate amount of money, meaning she knew the value of said pearls and not only how to pawn them, but how to get the owner to giver her dollars, not euros.
3) She walks into a hotel and rents a room, no adult, passport or credit card needed. Again, without speaking the languages.
4) She easily maps a route through Europe that necessitates trains, buses, ferries and taxis and uses all transport without trouble. Again, without speaking the languages.
5) She rides all said transport, crossing several borders and no one bats an eyelash at two youths traveling alone. Same when she catches a plane home. Again, without speaking the languages or having a passport.

Yeah, I had a little trouble keeping her age in mind. On a positive note, I did think the writing was good. There was an occasional tendency to over-use names during dialogue, but mostly it flowed pretty well.

But like the age issue, I also had a problem with the book’s timeline and geography. They swam, yes SWAM across the Atlantic ocean in a matter of days….DAYS…swimming…with her human arms and legs. From Bermuda to the Azores is roughly 2,225 miles, according to Google, and they swam that in a few days, navigating by who knows what and finding an island to sleep on each and every night. Um…………..no. So, there was a fair bit of suspending belief needed to make this story work.

There were also some character inconsistencies. Dylan seemed quite modern and aware of the world when he and Bren met, but about halfway through the book he seemed to lose a lot of that knowledge. Lastly, I was confused on the language issue, and not just how the pair traveled Europe. Why, for example, do merfolk (who speak several land languages) speak English between themselves?

I do have to give the books props for being willing to challenge some engrained expectations though. I won’t leave a spoiler on the biggest one, but a character acts just as you wouldn’t expect and I liked that twist. There is a George R. R. Martin-like event that I didn’t see coming and wouldn’t have expected most authors to brave. Similarly, Varden provides no happy ending here, not even a happy for now. That takes guts in a writer and I appreciated that a lot.

All-in-all, I had some major problems with this book, most of which could be overlooked with enough suspension of disbelief and none of them were enough to truly compromise my enjoyment of the story. Dedicated YA fans would probably enjoy it a lot more than me.