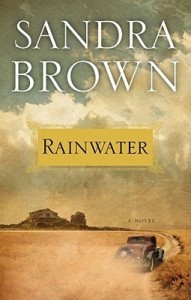 I won a signed copy of Sandra Brown‘s novel Rainwater from a Goodreads Firstreads giveaway.

Description:
The year is 1934. With the country in the stranglehold of drought and economic depression, Ella Barron runs her Texas boardinghouse with an efficiency that ensures her life will be kept in balance. Between chores of cooking and cleaning for her residents, she cares for her ten-year-old son, Solly, a sweet but challenging child whose misunderstood behavior finds Ella on the receiving end of pity, derision, and suspicion. When David Rainwater arrives at the house looking for lodging, he comes recommended by a trusted friend as “a man of impeccable character.” But Ella senses that admitting Mr. Rainwater will bring about unsettling changes.

However, times are hard, and in order to make ends meet, Ella’s house must remain one hundred percent occupied. So Mr. Rainwater moves into her house…and impacts her life in ways Ella could never have foreseen….

Review:
Anyone who reads many of my reviews knows that I read a lot more fantasy/Sci-fi than I do literary fiction, but even I need a little variety every now and then. I won this last year and felt guilt about it still sitting on my shelf, so I decided to finally give it a read. I’m glad to have read it now that I have, even if it is one of those Depression era novels where even the happy endings are heart rending and sad. Having said that I did generally like it. Mostly because Mr. Rainwater was every bit the honourable gentleman of my dreams. He was wonderful. It would be awful hard not to like him. I liked Mrs. Barron, Margaret and the Doctor too, but it was Rainwater who stole the show. Guess that’s why the book’s named after him, huh?

This is the first Sandra Brown novel I’ve read and according to the acknowledges is a departure from her normal stories. She can sure write though. The prose of this book is beautiful and evocative. She manages to relate a lot of emotion in relatively few words. Small movements on the part of the characters relay a lot of meaning. Even though I had a fairly good idea of where the plot was going to end up (one way or another) I still hung on every word until I got there. Would be more than happy to read another of Mrs. Brown’s books.

On a totally unrelated point, I read the hardback edition and it is a beautifully put together book. I love the cover image and the addition of the little bit of fancy gold edging around the title and the deckle edging of the pages.