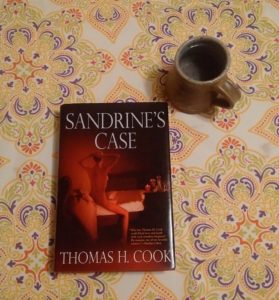 I won a copy of Sandrine’s Case, by Thomas Cook, quite a while ago. It feels good to finally get it read and reviewed.

Description from Goodreads:
Samuel Madison always wondered what Sandrine saw in him. He was a meek, stuffy doctorate student, and she a brilliant, beautiful, bohemian with limitless talents and imagination. On the surface their relationship and marriage semed perfectly tranquil: jobs at the same small, liberal arts college, a precocious young daughter, a home filled with art and literature, and trips to some of the world’s most beautiful cities and towns. And then one night Sandrine is found dead in their bed and Samuel is accused of her murder.

As the truth about their often tumultuous relationship comes to light, Samuel must face a town and media convinced of his guilt, a daughter whose faith in her father has been shaken to its core, and astonishing revelations about his wife that make him fall in love with her for a second time. A searing novel about love lost and rediscovered, from one of our greatest chroniclers of the human heart.

Review:
Oh, this is a hard one to review. I spent a lot of it feeling slightly bored and wishing the pace would pick up, knowing it wouldn’t. Despite that, it also kept the tension taut and I was never wholly sure which way the ending would go. Consider the whole book takes place in 9 days, most of those with the main character sitting idly in a courtroom, this narrative tension is quite the feat.

The book really made me think. What would I judge a man on, the person he once was, has recently been, is now or will be in the future? When there’s been or will be a significant breach between one and the other, this isn’t an easy question to answer.

For those who enjoy a slow, considered pace and tightly woven psychological thrillers. This is one worth picking up.