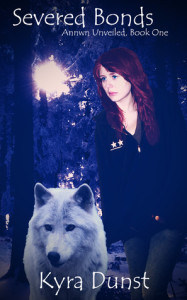 Description from Goodreads:
My life will never be the same again…

Sometimes I wonder if my life would have gone differently if I had been a little less impulsive. Most people would think twice about driving into a snowstorm, but not me. Now I am caught up in all sorts of trouble, and not of the weather variety.

Vampires, werewolves, and the Fae, oh my!

Yup, they exist, all right. And I landed smack dab in the middle of their little dispute. One faction wants to keep everything quiet, and the other? Well, they seek nothing less than total world domination. Or something.

And they both want me. Well, isn’t that special?

Now I am pulled so deep into their world that I can never hope to break free. Not only have I risked those I hold most dear, but I have discovered some things about myself that will change who I thought I was.

My name is Alexandra Blakely, Lexi for short, and this is how it all began.

Review:
This was an OK book. There wasn’t anything obviously wrong with it, other than I found that I didn’t much enjoy it. This was largely because I never bonded with Lexi. She did nothing for me and I very quickly tired of her ‘woe is me’ mantra (a bad combination). Plus, by virtue of the fact that she continued to survive encounters that the reader is told only strong people survive, one would assume she was a strong character. But I found her limp-noodle-weak, unintelligent and, despite claims to the contrary, far too ready to hand control to others.

She constantly did stupid stuff like purposefully deciding to ignore everything she didn’t understand or insisting that others were crazy for displaying amazing and undeniable feats of magic. If anyone was crazy in that scenario it would be her, but she constantly reminded herself to avoid the crazies.

Worst of all, Lexi was a freakin’ marionette! Seriously, throughout the book her actions were controlled by one man after another (and I mean her physical actions were physically controlled against her will). I found it infuriating. How am I supposed to see a woman who can’t even wrest control of her own body from another strong? Even worse, how am I supposed to respect her when she then willing hands that control to 3rd person? I got seriously tired of hearing, “You’re going to have to trust me,” and then watching her give complete control and responsibility to a man. Further, any time her thoughts/actions were her own she did little more than sleep or fret about the love triangle.

Said love triangle was ridiculous, mainly because the two men were little more than Disney Princes. You know the sort I mean—handsome, ostensibly honourable, etc but TOTALLY characterless. I don’t feel like I got to know them at all, especially Kade. They were just objects for her to obsess over. Plus, the whole thing was a tease. Lexi went on and on about her libido, but there’s barely more than a kiss anywhere.

The writing itself was fine. The dialogue felt a little stiff at times, but it was mostly without issue. There were some editing issues, not too many typographical mistakes but a lot of tense changes and it frequently shifted between first and third person. Annoying, but not hugely disruptive.

All in all, I can see a lot of New Adult readers out there loving this book. It’s a fairly clean read and I’m sure Lexi’s control issues won’t irk everyone as strongly as it did me. But I found myself gritting my teeth a lot. I wanted to backhand Lexi on more than one occasion. I’m not particularly interested in reading the next in the series.