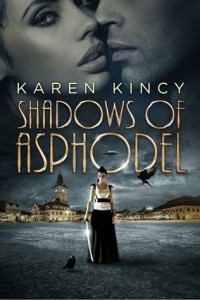 I grabbed a copy of Karen Kincy‘s Shadows of Asphodel from the Amazon free list.

Description from Goodreads:
She never asked for the undying loyalty of a necromancer.

1913. Austria-Hungary. Ardis knows better than to save a man on the battlefield. Even if he manages to be a charming bastard while bleeding out in the snow. She hasn’t survived this long as a mercenary without some common sense.

When she rescues Wendel, it isn’t because he’s devilishly handsome, but because he’s a necromancer. His touch can revive the dead, and Ardis worries he will return from the grave to hunt her down. Besides, a necromancer can be useful in this world on the brink of war.

A gentleman of questionable morals, Wendel drops to one knee and pledges his undying loyalty to Ardis. She resists falling for him, no matter how hot the tension smolders between them. Especially when she discovers Wendel’s scars run much deeper than his skin, and it might be too late to truly save him from himself.

The problem really comes down to the romance and the fact that it’s not at all supported. Ardis meets Wendel on the battle field and on discovering he’s a necromancer, she’s so afraid of him that she’s not even willing to let him die (for fear he’ll come back from the dead for revenge). Further, she so disgusted by him she can’t even touch his hand with her fingers.

Then, less than a day later she’s grabbing him by the back of the neck and dragging him down for an impassioned kiss, but turning down sex because she wants something more than just a one-night stand. But the reader sees NOTHING to change her opinion or feelings toward him and honestly in less than 24 hours what conceivably could?

Then the next time they meet, meaning they’ve now known eachother a collective 36 hours (at most) and very little of that time is spent in conversation, they have sex and he’s telling her he loves her. They then are swearing to defend eachother to the death, etc. etc. etc. It’s not insta-love, it’s just insta-meaningful relationship. And there is nothing at all in the story to leave the reader feeling as if they’ve seen this relationship grow. What’s more, Ardis’ love seems to be wholly based on some cliché female need to heal the broken soul of an abused man. Ugh, please.

Plus, I was embarrassed for Ardis and the way she always seemed to be subtly demanding love from Wendel. She always behaved as if their relationship was more than he was offering. It was like seeing a woman trying to trap a man into marriage. Now, I’m fairly sure it wasn’t meant to feel like that. I think she was supposed to just have a big heart that she was offering to Wendel and that is what he responded to and changed his rogue-like ways. But it didn’t feel like it to me. She just felt clingy and demanding. (Though I appreciated her demanding nature in the sex scenes; I like encountering a female character who knows what she wants and is willing to say it.)

So, since the romance that was the reason the two characters were together to do the things they were doing felt hollow and unsupported, nothing else in the book felt believable to me either. Every-time Ardis ran off to save Wendel again, I wondered why. Every-time Wendel declared his adoration for Ardis, I wondered based on what. Every-time Ardis disregarded people’s warning about Wendel I thought, idiot, they’re probably right. The underlying scaffolding of the story was weak, thus everything else felt wobbly.

Beyond that, the story is mildly interesting, until the end when you reach a patently ridiculous ending where the ultimate baddie essentially allows them to waltz in, fight and waltz out again. How is that believable?

The writing is fine. The editing is fine (a few hiccups, but not many). The dialogue is fine. I liked the idea behind the book and the world. I almost liked the characters. I thought that Ardis, for a mercenary, was awful weepy and Wendel’s fragility felt contrived. But, for the most part, it was all passable.

I’d also like to comment on the cover. It’s a cool cover. I like it, but I don’t understand it. One can only assume that is meant to be Ardis on the cover, but quite a big deal is made out of her appearance in the book. She’s half Chinese and half American. She inherited her mother’s eyes and her father’s corn-silk blond hair. Why do publishers insist on putting characters on covers that look nothing like the characters are described in the book? It’s a huge pet peeve of mine. Either make them match or don’t bother, is my opinion.