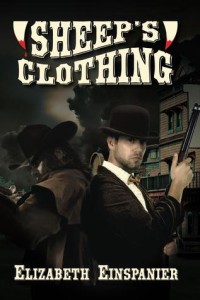 Book ten of my Taking Care of my Own challenge: Sheep’s Clothing, by  Elizabeth Einspanier. After seeing Ms. E.’s post on ReviewSeekers, I got it free from Amazon and at the time of posting it was still free.

Description from Goodreads:
It is the year 1874.

Doc Meadows, frontier doctor working in the small town of Salvation, has always considered himself a sensible man, and has not believed in monsters for a long time. When injured half-Indian Wolf Cowrie staggers into his practice one night, however, he brings terrifying news–a vampire he hunts plans to settle in Salvation and turn it into his own private larder. Now Doc has to overcome his skepticism and fear in order to face down this new threat to his town, before Salvation becomes just another ghost town in the territories.

Review:
I found this an enjoyable old-school vampire book, the kind where vampires are soulless evil beasts, bent on human destruction. The inclusion of a skinwalker, instead of a werewolf was an interesting twist on the age-old vampire/werewolf divide (as well as an ingenious way to position the story in the Wild West) and I liked Doc and Wolf. (I was especially amused by their particularly descriptive names.) All in all, a success in my opinion.

The very description says the book takes a lot from Dracula and it’s not kidding. Little things like the two women traveling with Russeau being referred to as his ‘brides’— not his wives or his women or his companions, but his ‘brides,’ just like Draculas’. I see this as taking language from a previous story instead of just mythological bases, like the need to sleep on home soil, for example. For me it was a little too much. It made it feel much more like fan-fiction than a separate vampire tale using original material. This was a shame but a relatively small matter.

Additionally, while I appreciated seeing a more traditional vampire, the whole ‘brides of Dracula’ thing was my least favourite aspect of Stoker’s book. (Ok, the worship of Mina’s apparent purity and basic flawlessness was my least favourite part, but beyond that, the oversexed, volition-less, singleminded female servants of Dracula were my next least favourite part.) Unfortunately, that carries over here too. The women are ‘his,’ ‘bound to him’ and apparently serving no purpose beyond shadowing him and fulfilling any ‘bride’ duty an immortal might feel the need to keep a couple complacent women about for. Meh. But again, a relatively small matter.

What wasn’t a small matter for me, was that people accepted the existence of vampires with startling ease. I actually liked that in 1874 the uneducated masses didn’t even know what a vampire was. But not a single person (even the man who had just been told he was now nothing more than a reanimated dead, severed head) freaked out at any point. Seriously, these people were calm and collected at every turn. Unrealistic doesn’t begin to cover it. This was a fairly massive detraction for me.

I also thought that it lacked some character development, especially in Wolf. He’s on a pretty drastic mission, for an important and personal reason but we’re just told bla, bla, bla and move on. I didn’t ‘feel’ him or his pain at all and I needed to have. Russeau was also defeated really easily in the end.

The writing is really good, though. The use of regional accents gives it a little flare without going overboard to become annoying and it’s well edited and readable. Well worth picking up.