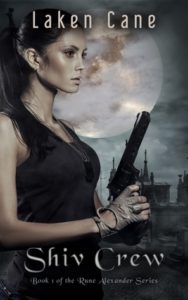 I picked up a copy of Laken Cane‘s Shiv Crew when it was free on Amazon.

Description from Goodreads:
Rune Alexander wants to get through her days doing her job, which is protecting the humans against the myriad of supernatural creatures, known as Others, who exist uneasily in a human’s world.

But she is unstable and damaged. She realizes how broken she is even as she continues to submit to the unspeakable things her lover does to her, craving desperately the strange peace she finds in the aftermath.

When she discovers things are not as they seem and a faceless human is torturing the supernatural groups in her city, she and her crew must break the rules and begin to protect the Others from the humans.

But as the darkness inside her becomes stronger and she ends up on the wrong side of a battle she must not lose, who will save Rune from herself?

Review:
This is one of those middle of the road books that has a decent plot idea and the writing isn’t bad, so it tricks some readers into thinking the book is good. It isn’t. Now, before anyone accuses me of cruelly trashing the book, I’ll reiterate, It’s not bad either. It’s just ok. But it could have been so much better.

My main issue is that the book is a bit of a one trick pony. Rune Alexander (not be to confused with Lex, which is so expected a nick name that it belonging to another character is confusing) is an angry woman…that’s about it. That anger makes her strong, makes her stupid, makes her friends, makes her enemies, makes her weak. It’s pretty much the core of what she is and that’s just not enough character development to make her relatable. And if she’s undeveloped, the others are paper cut outs. What’s more, it’s this anger that moves the plot and saves the day. That’s not really enough to carry a believable story either.

That plot too is thin. The villain is obvious from the very beginning and there are no real unexpected twists. Rune defeats enemies she really shouldn’t be able to. She intimidates others for no apparent reason. She is pathologically loyal to her assistant for a reason we’re never given. Followers of the enemy defect and come to her, with no explanation. There is some weird sadism/masochism thing going on that just felt like the author trying to give the book some edge. A romance of sorts sparks at the very end out of nowhere. There’s a bit of a deus ex machina ending.

The thing is, a lot of these same points have potential to make for interesting contributions, but instead they’re like dough balls falling to the floor. Just kind of landing with a resounding splat and laying there. Present and accounted for, but of no use. For example, big men being loyal to and taking orders from a woman they’re protective of is a sexy button for me. I love big dangerous men submitting to a woman. I just do. This book has several of them, one even literally presenting himself at her feet. I should be thrilled. But we get no history. We see no reason these men are so dedicated to Rune (and visa versa). It’s flat. Rune is basically the Trump of the book, talking a big game about how awesome she and her team is, but not really giving anything to back the statement up.

Again, not bad. It’s an enjoyable read. But it’s full of holes and doesn’t withstand scrutiny of any sort.