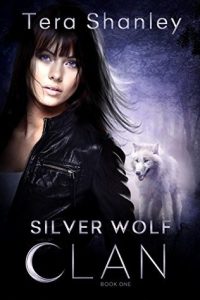 I picked up a copy of Silver Wolf Clan, by Tera Shanley, when it was free on Amazon…in 2015.

Loving him will be legendary…if she can survive it.

What happens when monsters turn out to be real? One summer night while camping in the woods, Morgan Carter finds out in a big way. A tall mysterious stranger, Greyson Crawford, risks his life to try and save her sister from the vicious wolf attacking their camp. When he’s bitten and disappears into the night, Morgan can only assume the worst.

Greyson shows up a year later, and he’s a different animal altogether. His eye color shifts constantly and the rumble in his throat sounds more animal than human. She hasn’t any idea where he’s been all this time, but a good guess as to what he’s become.

Grey is determined not to let the darkness of his new existence affect Morgan and the little girl in her care. He hasn’t been able to stop thinking about Morgan but knows he should stay away and let her live a normal life. That’s easier said than done, though. A new danger pulls him from the shadows to keep her safe, and he’s no wolf in sheep’s clothing.

Can she accept what lurks just below his surface? More importantly, can she survive him?

This review contains spoilers.
.
.
.
This was SUPER cliched. Every aspect of it has been done and done better. What’s more, a lot of it irritates the living daylights out of me.

Let’s start with the fact that there are 4 women in it. 3 of them have been subject to violent male attacks. (And all we know is that no attack is mentioned for the fourth.) So, women are all victims. The hero is forced to rescue the heroine from a random rape. Because of course heroes always have to save their loves from random rapists. That’s what happens if a woman goes out alone, you know? (Can this particular plot point die already?)

The single adult, non-mated woman is evil. Because of course single women can’t be trusted, especially if they’re sexy. They’re obviously all jealous, evil bitches who will kill because they can’t get the man they want. (As if there are no other motivations for women than men.)

Then, when the heroine is turned into a wolf she is special, because of course she is. But not just normal, cliched special. But extra cliched special. She’s special because she’s the only female wolf who can have breed children. (Nope, I’ve neverread that plot before and it’s not just the unexplored norm of a female character. *sigh*) So, of course male werewolves will forever be trying to forcibly claim her (a euphemism for rape). And of course so far, no one has bothered to tell her, because this is her mate’s problem, not hers apparently, since it’s his responsibility to protect her, not hers.

And those are just my issues around gender. How about how little sense it made to let the evil, untrustworthy person walk out with the biggest secret in werewolfdom? Nope, I can’t see that coming back to bite them in the ass…nope, not like that’s just a totally stupid and unbelievable act that is setting up a totally predictable rest of the plot. *sigh*

It needs some editing assistance too, to catch things like terms being dropped into use and never defined. We’re told, for example, that Grey let his wolf go and became a “Ripper” (capitalized). Then someone else says, “thank goodness you’re a Ripper.” So, apparently this is something Grey and other wolves knew about, a known characterization, but it is never defined for the reader. I had no idea what a Ripper was supposed to be.

While I’ll grant that Grey was a sweetheart and I liked the addition of a child, I have NO interest in any more of this series. It hit just about every I-hate-these-PNR-tropes button I have. And honestly, to have so many too-often used tropes in one book is just a sign of bad writing.