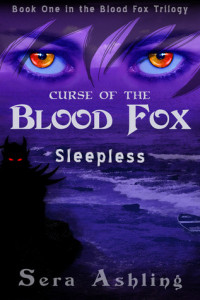 I nabbed a Copy of Sleepless, by Sera Ashling from the Amazon free list.

Description from Goodreads:
Curses are not subtle.

They are things of pain, and for a very long time Santo has been caught in one. She haunts the roads of the country of Kurdak as a mercenary, fighting back sleep every night so that she won’t have to face the horror that comes for her when she rests. Weary, with sanity almost gone and no end in sight, Santo doesn’t know who did this to her or why she is still alive.

As the mythical Week of Colors arrives, she receives a visit from a long-time acquaintance. Traken is a sharp-tongued sorcerer with a sadistic streak, and he comes bearing an “invitation” from his master, a secretive lord who has been watching her for far too long. Santo isn’t thrilled, until another message arrives in the form of an ominous prediction: following the sorcerer will mean the answers she wants, but she’ll likely die in the process.

Review:
Wow, I am thrilled 2015 is starting so well. I stayed up way too late last night to finish this book. Then, tired as I was, I had to check if the sequel was available before I could drag myself to bed. (It’s apparently not, but I would have bought it if it had been.)

I had very low expectations from this book, being an Amazon freeibe. But it surpassed them by some distance. Santos and Traken are a fun pair. At the start of the book they are long time acquaintances, familiar and comfortable (if wary) with one another, but not friends. That changes over the course of the book and the back and forwards banter was great.

Santo is a wonderfully strong heroine, never flailing helplessly or swooning for a man. Meanwhile, Traken is nursing a touching fragility (while still remaining badass). Plus, though there’s no sex or even much romance, seeing a man practically begging a woman to give him orders is darned sexy. Having read what I just wrote, it doesn’t sound like it would be, but in the context of the story it really is.

I’m also happy to report that this isn’t a YA book. There isn’t anything in it that would be unsuitable for younger readers, but it’s pleasantly adult for a fantasy. There is violence and surprisingly grown-up themes of healing and redemption.

The writing was fun to read and the editing was fine. I noticed a few dropped particles here or there, but that could have been a character’s speech pattern. Hard to tell.  And, though never dull, the book does seem to drag a bit in the middle. There just seems to be a lot of middle, if that makes sense. All in all, a real win in my book, made especially sweet since I really hadn’t expected as much.