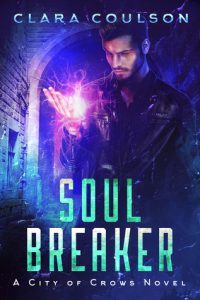 I picked up a free copy of Clara Coulson‘s Soul Breaker from Amazon on the recommendation of someone in a Fans of Urban Fantasy group.

Description from Goodreads:
There’s a hideous monster on the loose, crushing heads and taking names.

But Detective Calvin Kinsey is on the case!

Two years ago, Cal Kinsey was an up-and-coming cop in the Aurora Police Department. But during a fateful nighttime stakeout in search of a prolific killer, Cal witnessed the darkest corner of his dreams come to life. A rogue vampire slaughtered his partner — to put it nicely — and introduced Cal to the supernatural world he never knew existed in the shadows.

Now, Cal is a newly minted detective at the often mocked Department of Supernatural Investigations. By day, the agents of DSI are called “Kooks” by local law enforcement. By night, they’re known as “Crows,” reviled by the supernatural underworld.

Mere weeks out of the academy, Cal catches his first real case, a vicious murder at a local college. An unknown sorcerer has summoned a powerful creature from the Eververse, a realm of magic and mayhem that borders Earth, and set it on a dangerous warpath through the city.

Between butting heads with his grumpy team captain, stirring up ill will with the local wizards and witches, and repeatedly getting the crap beaten out of himself, Cal must find a way to stop the Eververse monster and send it back to the hell it came from…

…preferably before Aurora, Michigan runs out of coffins for the dead.

Review:
I seriously did not expect to enjoy this as much as I did, so it really was an awesome surprise. Cal, while 22 and ready to be a hero, is also self aware and willing to be inspired by those around him, including several badass women. (Women who were martially badass without reading like men-with-tits characters). He’s inconsequentially bi-sexual, meaning it’s no big thing or in need of explaining. He’s bi, just like he’s brunette, no need for further drama about it (this isn’t a romance, after all). He shows emotion, including grief and tears and then gets up and does his job.

Of the side characters you have several powerful women, who aren’t using sex to get ahead. A 40+ year old women still allowed to be sexy, have sex and enjoy it, (So often ‘older’ women’ seem to have lost this aspect of themselves in literature.), man in authority who is grieving and showing physical pain but still functioning, an academic who is basically saving the day with research and being appreciated, and racial and sexual diversity.

All in all, I really liked this and look forward to more. I did think Cal made a couple leaps of logic that were a little too keen to follow and despite saying he’s scared and such, he was a tad close to Marty Stew perfection (but not too close). I’ll be looking for more books by Clara Coulson.