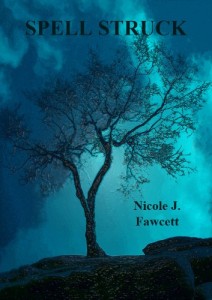 In December of 2012, I downloaded Nicole J. Fawcett‘s Spell Struck from the Amazon free list. I read it as part of me TBR reading challenge (reading books I’ve own 2+ years).

Description from Goodreads:
Rhiannon Grey is a detective in a hectic police headquarters. She’s also a witch, in a society that’s learned not to think too highly of the supernatural, and her boss is a two thousand-year-old vampire. Rian has discovered the hard way that trouble is always just around the corner.

This time, trouble is called Griffin King, a fifteen year old runaway whose strangled corpse is found floating in the river. He’s not the first street-kid to vanish recently, or to turn up later, very dead. When Rian starts to suspect he was a witch, too, and that his magic led to his death, her investigation turns into a personal crusade.

No one seems terribly concerned about the fate of a few disappeared urchins, though. And when a series of brutal murders starts panicked speculation about a nest of vampires, Rian’s boss has other things on his mind.

Reading:
This is a perfectly passable, but basically uninspiring PNR. Rian wavered between being strong and smart and being the child-like joker of the detective team (certainly never quite as slick, together and leader-like as any of the men who were ostensibly her equals).

She went back and forward between kicking butt in a fight and tripping over her own feet, especially when scantily dressed such that the UST was artificially amped up. (Because she forgot to put a robe over her panties and crop top pyjamas while self-consciously sharing a hotel suite with a man she’s attracted to. Sure, that kind of thing happens all the time, right?)

She also oddly needed a two thousand-year-old vampire to teach her how to use magic, despite coming from and being raised in a long-standing, powerful family of witches with Fae connections, had a tendency to run off and do TSL stuff when she was unhappy, suffered a minor mental break-down out of nowhere and instigated what will obviously be a love-triangle in future books. So, there were definitely parts of this book I distinctly disliked but for the most part, I enjoyed it. I was especially fond of Cato, Safi and Marco.

The writing and editing was fine. Though there was a habit of putting a space between the beginning quotation mark and the first word of a quote (like this, ” bla, bla, bla”). I’ve seen people do that before, so maybe it’s a standard somewhere but it drove me crazy. Otherwise, I have no real complaints about the writing/editing. (Oh, except that the title makes no sense when, not once in the whole book, did ANYONE sling, craft, chant, speak or even get struck by a spell. In fact, we’re kind of told magic doesn’t work like that. Maybe I missed something.)

I enjoyed the book enough to pick up a sequel if I saw it on sale, but not enough to buy it at full price. (That’s a legitimate way to rank a book right?)