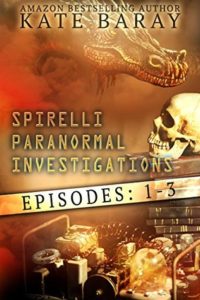 I picked up a copy of Spirelli Paranormal Investigations (episodes 1-3), by Kate Baray, when it was free on Amazon.

Description from Goodreads:
Jack Spirelli, paranormal investigator, public debunker of paranormal frauds, and private fixer for the magic-using community has opened his doors.

Jack’s in a crunch. Since he went pseudo-public with Spirelli Paranormal Investigations, his business has sky-rocketed. Debunking the scum who prey on vulnerable targets makes up half his business now. And the rest of his time? Jack’s on speed dial with the Texas Lycan Pack, the Inter-Pack Policing Cooperative gives him an occasional ring, and anything that goes bump in the night might just call him with a job.

He needs an assistant, another investigator, and some additional muscle, but maybe the dragon who just walked in and applied will do for now.

Review:
I am on record saying I hate serializations. And it’s generally true. However, this is the sort of serial I can get behind. Each episode is a COMPLETE arc. Each is an investigation with a beginning, middle and END. So I never felt I’d wasted time on a story I was never going to see the conclusion or, which is how most serials make me feel. Praise the sweet little baby Heyzeus for that. While I didn’t find Jack or Marin deeply developed, I enjoyed them both and the way they played off each other. The world is interesting and the ‘investigations’ amusing. All in all, I call this a win.