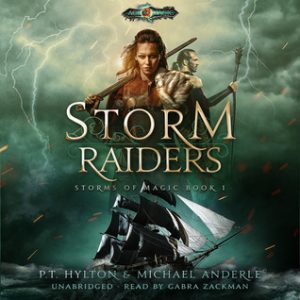 I received an Audible copy of Storm Raiders (by P. T. Hylton & Michael Anderle) for review.

Description from Goodreads:
In a time when magic rules the sea, she only trusts her sword.

Abbey has always been an outsider in Holdgate. While the people of her adopted city dominate the seas with their weather-controlling storm magic, she prefers the work in her father’s blacksmith shop.

Besting any foolish enough to question her skills with a sword.

But when her father is falsely accused of murder, she has to sneak aboard a stormship and take to the seas in a quest to clear his name.

Teaming up with a young storm mage and a no-nonsense Captain, Abbey sets off on a swashbuckling adventure.

She’ll soon learn that the legendary Storm Raiders–a terrifying group of seafaring pirates–are all too real.

Set on the foundation laid by the Kurtherian Gambit Series, Storm Raiders tells an entirely new story in the Age of Magic–and of the heroes and villains who battle for control of its destiny.

Review:
Generally enjoyable and I thought Gabra Zackman did an excellent job with the narration.

The good: I liked Abby and Dustin. I liked that she’s pretty much badass and he’s more than willing to let her go forth and kick butt, while he takes a step back. I thought the writing was quite readable and the world, future Earth, is interesting. Though that same world seems to be part of a larger series in which several authors are creating stories. (I didn’t realize that until I got to the Authors’ Notes section at the end.)

The bad: I simply could not believe that there was such a large and long running conspiracy and no one knew about it. Which mean, I pretty much didn’t believe the underlying premise of the mystery and plot. Further, I don’t believe that even if such a large, long running conspiracy had been occurring two separate groups could undercover it in a day or two. That was all far too convenient and easy.

Personal quibble: I didn’t like the cursing. Now, I don’t have any issue with cussing in general. I, myself, curse like a sailor. But the book is YA and I would say on the lower side of YA. Not quite MG, but certainly I could see a tween reading it; which means the cursing seemed out of place. So, my complaint isn’t any sort of prissy, moralistic one, but stylistic. It felt like the author aimed for a certain audience, which genre-wise generally doesn’t include ‘dirty words,’ but then dropped a curse in every once in a while and then I didn’t know which age bracket he was aiming for after all.