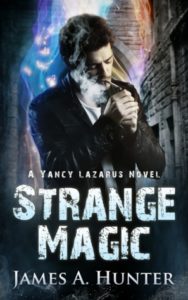 I downloaded a copy of James A. Hunter‘s Strange Magic from Amazon, when it was free.

Description from Goodreads:
Yancy Lazarus is having a bad day: there’s a bullet lodged in his butt cheek, his face looks like the site of a demolition derby, and he’s been saran-wrapped to a banquet table. He never should have answered the phone. Stupid bleeding heart—helping others in his circles is a good way to get dead.

Just ask the gang members ripped to pieces by some kind of demonic nightmare in LA. As a favor to a friend, Yancy agrees to take a little looksee into the massacre and boom, he’s stuck in a turf war between two rival gangs, which both think he’s pinch-hitting for the other side. Oh, and there’s also a secretive ass-hat with some mean ol’ magical chops and a small army of hyena-faced, body- snatching baddies. It might be time to seriously reconsider some of his life choices.

Yancy is a bluesman, a rambler, a gambler, but not much more. Sure, he can do a little magic—maybe even more than just a little magic—but he knows enough to keep his head down and stay clear of freaky-deaky hoodoo like this business in LA. Somehow though, he’s been set up to take a real bad fall—the kind of very permanent fall that leaves a guy with a toe tag. Unless, of course, he can find out who is responsible for the gangland murders, make peace in the midst of the gang feud, and take out said magical ass-hat before he hexes Yancy into an early retirement. Easy right? Stupid. Bleeding. Heart.

Review:
I thought this was a pretty good urban fantasy. Yancy had an amusing personality and I appreciated that he was supposed to be 65 (though he looked and acted much younger, which compromised the mature adult hero a bit). The baddie had a bit more depth than many such books and the whole thing wrapped up nicely.

I did however think that Yancy and Greg’s constant banter felt forced and disruptive, annoying even. I felt like I was missing some history, the when, how and why of getting his mage powers, for example, not to mention who trained him. The writing also tended toward repetition at times.