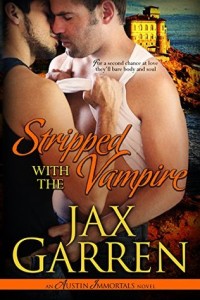 I received a copy of Jax Garren‘s Stripped with the Vampire from Netgalley.

Description from Goodreads:
Shy vampire Charlie never intended to see Vince again after the bad boy human broke his heart. But when Vince turns up beaten and marked for sacrifice to an Aztec God, Charlie will do anything keep him safe.

Vince has never forgiven himself for the lie that ended things with Charlie. The spark between them is as hot as ever, and Vince would risk body and soul to make it a fire again. But as they hide deeper in Austin’s supernatural society—a world of lies, dark magic, and warring immortals—he finds the path to reconciliation more twisted than he’s ever imagined.

Review:
This is a hard book to review, because objectively I don’t think it was very good. It was campy, sappy, full of ‘love will conquer all’ tropes and repressed gay men stereotypes. But I still found myself enjoying it. This is especially true when I consider my enjoyment level next to my initial expectations given the book’s title. I’m sorry Jax Garren, but I think that title is a horridly unfortunate choice. It leads reader to believe this is going to be a cheap, plotless, possibly PWP book and even I, with my faint praise, have to admit it’s more than that.

To illustrate my inconsistent feelings on this book, let me drop a few contradictions. I thought it was funny, but I also thought the characters ability to joke and not freak the flip out unrealistic. I liked the characters in general, but I thought Vince’s inability stop baiting people in the presence of very real attempts on his life over played. I thought they were a cute couple, but thought Charlie’s reluctance after 300 years as a gay man were illogical and Vince’s unwillingness to make allowances for Charlie’s fears selfish. I thought the bad guys and battle were fairly epic, but who really catches the villain and then lets them go…twice? Honestly, for almost everything I liked, there was an opposite that annoyed me.

On a side note: One of those characters on the cover is presumably Charlie…who should have red hair and freckles. I’m firmly of the belief that if you’re going to put a character on a book’s jacket, it needs to match that character. People notice these things.