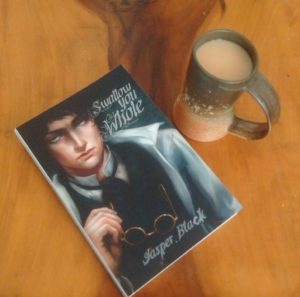 I won a signed copy of Swallow You Whole, by Jasper Black, from Goodreads.

Description:
For two villainous nobles, it is a desperate means to an end. For two clever demons…it is one hell of a tax break.

Henry and James have accidentally staked claim on the same soul. Elliot Dosett, the bitter and sickly son of a successful steel magnate, summoned a demon in hopes of solving his trouble with his father and inheriting the estate. Violet Clifton, his aunt, also summoned a demon in order to rid herself of a useless husband and take over the business he leaves behind. In order to delay her own death, she also signs away Elliot’s soul. And so the paperwork begins to fly.

Lady is a fallen angel. He is also one of Hell’s top auditors. He is sent to monitor the activity of Henry and James. Once he finds out which demon is trying to cheat Hell, his job is to send them back in chains.

Henry will do anything to avoid being reported, dragging James and Lady down the path of a capricious scheme. Yet Satan is hot on their heels and will stop at nothing to hunt them all down; even if that means interrupting God’s latest round of golf.

Review:
A point of clarification on the front end, I would not consider this a romance. Maybe I’m the only one who mistakenly thought it would be, but I don’t think it is. Whatever it is, horror-slash-humor maybe, I quite enjoyed.

I liked both James and Henry. I thought God, Satan and the other angels/sins that show up were well characterized. Violet and Elliot, the peevish, evil humans, were suitably evil. There were a few unexpected turns. The author stuck with the inevitable ending, which pleased me and there were quite a few ironic, funny moments.

I did find the fact that the celestial realms seemed to run on a different time than earth jarring and anachronistic. I understand it was purposeful, but it still pulled me out of the story. Lastly, I think it could have done with another editing pass. But the truth is I’d almost forgive it this for the awesome cover.

What I’m drinking: What the English might call Builder’s tea. One inexpensive bag of black tea, quite strong and a dash of milk. This is one of my comfort drinks. These days, I’m often off dairy. So, I don’t drink it as often. But for pure, melt into the couch relaxation, it’s my go-to drink.