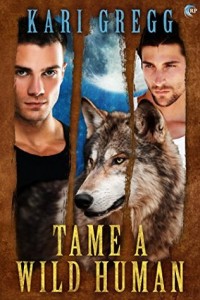 I got a copy of Tame a Wild Human, by Kari Gregg, from Netgalley.

Description from Goodreads:
Drugged, bound, and left as bait on the cusp of the lunar cycle, Wyatt Redding is faced with a terrifying set of no-win scenarios. Best case: he survives the coming days as a werewolf pack’s plaything and returns to the city as a second-class citizen with the mark—and protection—of the pack. Worst case: the wolves sate their lusts with Wyatt’s body, then send him home without their protection, condemning him to live out the rest of his short life as a slave to the worst of humanity’s scorn and abuse.

Wyatt’s only chance is to swallow every ounce of pride, bury his fear, and meekly comply with every wicked desire and carnal demand the wolf pack makes of him. He expects three days of sex and humiliation. What he doesn’t expect is to start enjoying it. Or to grow attached to his captor and pack Alpha, Cole.

Review:
I decided to read this as part of some bastardised version of Weird Shit Wednesday. I’m not part of any group officially doing it, but it seemed like a fun idea. So, I appropriated it. Granted, Tame a Wild Human isn’t as out there as Taken By The Gay Unicorn Biker or My Billionaire Triceratops Craves Gay Ass, both of which I’ve seen pass my Goodreads feed on Wednesdays, but it’s weird for me. I chose it because someone said it had knotting in it and I’d never read a shifter book that explored this aspect of canine physiology.

[The rest of this review will likely have spoilers in it, as venting my frustration at the book usually requires mentioning what annoyed me. Be warned.]

Now, I’ll grant that I chose this book because I was pretty sure it would be outside my comfort zone. I like challenging my limits on occasion and I usually have pretty good results. This was not one of those times. I did not enjoy this book. If I was using stars, I’d say it was a 1-star read, then I’d give in and allow it a second star (or maybe even only half of one) for being structurally sound and adequately edited. But it would get a 1-star, at most, for my enjoyment factor.

If rape and serious non-con is your kink, this book is for you. It’s not my kink and I did not enjoy spending at least half the book inside the mind of a man as he rationalises submitting to 3 days of constant gang rape in an attempt to save his own life. (Because the wolves have no problem f*cking a human to death, as we’re shown.) Plus, all I could think was, ‘This man’s been raped by 6+ others multiple times for 3 days straight, with no bathing facilities or even an attempt to wipe him down. He must freakin’ stink!’

Then, after over half the book had been dedicated to rape, rape, rape and the victim has given in to Stockholm syndrome and the apparent fact that regardless of terror, pain or self-preservation if you touch a man’s prostate he’ll get aroused, the victim was given something (I won’t say what) that made him ‘understand the wolves’ and want to be with them and submit to them. So, instead of constant rape we have a man who’s now begging for his abuse.

All of this was somehow wrapped up in the idea that human’s are cruel and wolves are caring, because, you know, they lubed him before gang raping him. Honestly, that whole plot-point made no sense at all. “Yeah, my 5 or 6 mates and I are going to gang rape you while you’re bound and blindfolded, for three days, all because we care so much for you. *cough* Bullshit!

Then the throw-in about the father…hey great, the willingness to submit to horrendous atrocities on one’s person runs in families. How wonderful for you. *cough* Bullshit!

Plus, you never get the satisfaction of finding out what happens to the brother who betrayed Wyatt. I suppose because by that point you’re supposed to have seen it as a good thing that he was bound, drugged and abandoned in the woods with a bunch of sodomite savages. Yeah, thanks bro, for real. *cough* Bullshit!

All of this might have been something I could have dealt with if the book had had any significant world building to situate it in. But it didn’t. We’re told humans make no effort to stop the wolves from kidnapping and gang raping people on the full moon and that any human who then returns without a token of protection is essentially an untouchable (or untouchable in any sense but to be further abused). But we’re not told why or anything about how society works. What’s more, being as there are obviously multiple wolf packs, who kidnap more than one human a month and almost no one gets a token, shouldn’t a fairly large swath of the city’s populous be untouchable? This isn’t made out to be a rare occurrence.

The book is also very violent. Again, I’m not particularly bothered by gore. I’m not even always bothered when violence and sex converge. But none of the violent sex in this book, which is essentially all of it (including watching a human get killed while you’re being f*ucked and only being able to save his life if you can climax in time) was erotic. Not once in the whole book of basically ceaseless sex did I feel a tingle. Nope, I might as well have been reading the Spam section Joy of Cooking, for as much as it turned me on. And that was sort of the whole point.

If I’m generous I could say I think I know where the author was trying to go with the story, though not wholly successful. But I’m not sure that would be true. I don’t know what was supposed to have been the payoff for the reader, Wyatt’s happy slavery maybe. I don’t know. I’m all for the occasional taboo read, but I wish I hadn’t read this one. It definitely wasn’t for me.