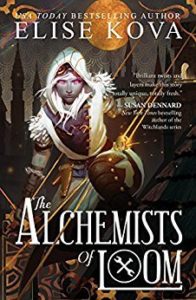 I received a copy of Elise Kova‘s The Alchemists of Loom from Netgalley.

Description from Goodreads:
Her vengeance. His vision.

Ari lost everything she once loved when the Five Guilds’ resistance fell to the Dragon King. Now, she uses her unparalleled gift for clockwork machinery in tandem with notoriously unscrupulous morals to contribute to a thriving underground organ market. There isn’t a place on Loom that is secure from the engineer turned thief, and her magical talents are sold to the highest bidder as long as the job defies their Dragon oppressors.

Cvareh would do anything to see his sister usurp the Dragon King and sit on the throne. His family’s house has endured the shame of being the lowest rung in the Dragons’ society for far too long. The Alchemist Guild, down on Loom, may just hold the key to putting his kin in power, if Cvareh can get to them before the Dragon King’s assassins.

He offers her the one thing Ari can’t refuse: A wish of her greatest desire, if she brings him to the Alchemists of Loom.

Review:
I’m vacillating on this book. Some aspects of it I absolutely adored. But I also found it painfully slow at times and was disappointed to find that it didn’t wrap up nicely in the end. It’s not a precipitous cliffhanger, but it’s not really and ending either.

On the positive side of the equation, I found that once I had enough information to understand what was happening (and this took a while) I liked the world and the characters. There is a lot going on here, with the large, multi-cultured world and several races. I appreciated that the romantic subplot was slow to develop and didn’t take over the plot when it did. And I think most of the writing was really lovely. It got a little purple at times, but mostly it was quite lyrical and a pleasure to read. Oh, and the cover is Awesome!

This was the first book by Kova I’ve read, but I’d be well up for another one.