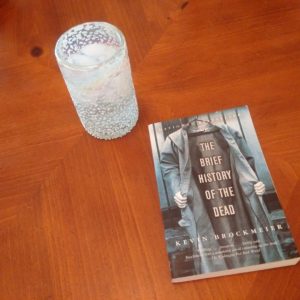 I purchased used paperback copy of Kevin Brockmeier‘s The Brief History of the Dead.

Description from Goodreads:
The City is inhabited by those who have departed Earth but are still remembered by the living. They will reside in this afterlife until they are completely forgotten. But the City is shrinking, and the residents clearing out. Some of the holdouts, like Luka Sims, who produces the City’s only newspaper, are wondering what exactly is going on. Others, like Coleman Kinzler, believe it is the beginning of the end. Meanwhile, Laura Byrd is trapped in an Antarctic research station, her supplies are running low, her radio finds only static, and the power is failing. With little choice, Laura sets out across the ice to look for help, but time is running out. Kevin Brockmeier alternates these two storylines to create a lyrical and haunting story about love, loss and the power of memory.

Review:
Oddly enough, this is the second book I’ve read in less than a month about someone being stuck, alone in Antarctica during the apocalypse (The other being Good Morning, Midnight.). I guess it just strikes authors as appropriately desolate for the end of the world. The books hold another similarity too. They both ended without quite clarifying what happened next, at the end of it all, leaving a dis-satisfyingly open ‘what if.’

Beyond the annoyingly open ending, I found this enjoyable. The writing is really descriptive and beautiful and I enjoyed the characters and its tendency to show so full a variety of humanity. There are a lot of not-quite-characters that pop up to showcase life. It also quite cleverly shows Laura’s effect on people and the city, without telling the reader about it.

I don’t want to go into too much more detail, because it’d require spoilers. But, brass tacks, I liked it.

What am I drinking: An oversized Gin and Tonic. I added too much gin and then more tonic to balance it out, then it needed a bigger glass…that’s the story I’m sticking too. More interestingly, the glass it eventually ended up in was hand-blown in Mexico and I got it through Globe-in, which is kind of cool and worth exploring if you’re into the whole subscription box thing.